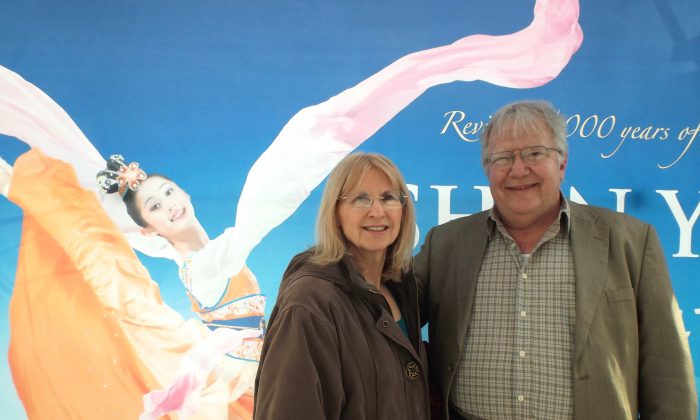 Arthur Langston, a professional musician who teaches music at Lincoln University in Jefferson City, attended the performance at the Muriel Kauffman Theatre with Sharon Strickland. “With art that’s really good, the very difficult is made to look easy, and that’s one of the things that I enjoyed about the orchestra was that the traditional instruments … seamlessly fit in with the Western instruments, and I thought that was remarkable. I thought that was really wonderful,” said Arthur Langston, after seeing Shen Yun Performing Arts, in Kansas. (Chen Si/Epoch Times)
Company

KANSAS CITY, Mo.—“With art that’s really good, the very difficult is made to look easy, and that’s one of the things that I enjoyed about the orchestra was that the traditional instruments … seamlessly fit in with the Western instruments, and I thought that was remarkable. I thought that was really wonderful,” said Arthur Langston, after seeing Shen Yun Performing Arts.

Shen Yun, the world’s premier classical music and dance company started in 2006 with the mission of reviving the traditional arts and virtues of China.

Mr. Langston, a professional musician who teaches music at Lincoln University in Jefferson City, attended the performance at the Muriel Kauffman Theatre with Sharon Strickland, a retired special education teacher, on the afternoon of March 29.

“I really loved the way that they’ve combined the traditional Chinese instruments with the Western instruments. That was very well done. Wonderful orchestration, and wonderful compositions,” Mr. Langston said.

“A Western philharmonic orchestra plays the foundation, while traditional Chinese instruments lead the melodies. The sound produced is uniquely pleasing to the ear. The ensemble at once expresses both the grandeur of a Western orchestra and the distinct sensibilities of China’s 5,000-year-old civilization,” according to Shen Yun’s website.

Giving more insight into why Shen Yun’s music is pleasing, Mr. Langston said: “There’s a musical scale that’s really important in traditional Chinese music. It has five notes. All five notes sound harmonious; there are not ugly notes. And this five note scale is not just important in Chinese music. It’s [become] the basis of almost all American pop music. You find it in the Beatles, you find it in the Blues, and you find in reggae music. You find it in all sorts of music all over the world, and I think it’s something that really touches people, and people immediately feel an affinity for.”

“I think the melodies are very beautiful, very moving, and I think that’s what people connect with. People always love the melody. No matter how sophisticated the orchestra is, the melody always really moves people, and it reminds them of the human voice, and I think that’s why people are moved by this music, because they find it so lovely,” he explained.

Ms. Strickland also enjoyed the music, in particular the drumming. “The drumming was so thrilling, and it’s a different kind of drumming than we’re used to in the West, and I listened for all I could give in that performance,” she said.

“Yeah, it is really thrilling. That was a wonderful part of the performance,” Mr. Langston agreed. “The precision, and the forcefulness of it, and combined with the dancing, it was really wonderful. It was different than just hearing a musical performance on a recording. It was really special to see the way that they manipulate the instruments and the movements,” he said.

Turning to more serious issues, Mr. Langston touched on the plight of Falun Gong, a practice of meditative exercises based on the guiding principles of Truthfulness, Compassion, and Tolerance. Several dances depict the persecution of Falun Gong by the communist regime in China.

“I’ve been extremely concerned for a long time about the persecution of people in China who practice Falun Gong. I’m not a member myself, but I don’t like to see people bullied and treated that way. …. I would like people to be more aware of Falun Gong and also the people in Tibet that are being affected by the persecution,” he said.

Mr. Langston heartily recommends the performances to others. “It’s not the same, listening to a recording at home. They should come here and see these folks perform in person,” he said.