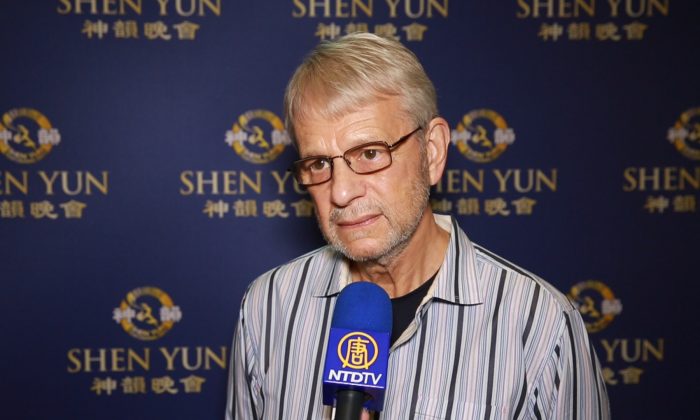 “It’s beautiful. It’s truly beautiful,” he said. “The choreography, the costuming, the colors, the whole architecture of the presentation is beautiful.”

Shen Yun is a New York-based, non-profit, classical Chinese music and dance company that includes the world’s foremost classically trained dancers, a variety of richly colored costumes, and a live orchestra that combines both traditional Chinese and classical Western instruments.

“The music–very lovely. The orchestra is perfect for the accompaniment, and I like it very, very much,” he said.

“It’s elegant. It’s light in the sense that everybody’s so fluid in their movements; it’s just beautiful to watch. It’s an art form, [a] total art form,” Dr. Finkel said.

“I love it; it’s beautiful and it’s a wonderful cultural experience, and I hope that many, many people get to enjoy it.”

Vicky Peterson, a musician who also attended Shen Yun Performing Arts on Feb. 4, was particularly struck by the orchestra.

“I absolutely loved it,” she said. “I love the combination of Western instruments and the traditional Chinese instruments—just beautiful.” She added, “I thought it was seamless. I didn’t find any distracting element. They were together beautifully; it was like the dance and the music hand-in-hand together.”

“To feel the uplifting spirit but to also see it is happening live was a very different experience, you don’t get that every day,” said Ms. Peterson.

“There was something divinely soothing about the music, and it’s very uplifting in the whole experience.”

Although most of a Shen Yun performance consists of classical Chinese as well as folk and ethnic dances, there is also an erhu solo performance. Erhu, or the Chinese violin, has a very ancient history. With only two strings, it can convey a wide range of emotions.

Ms. Peterson said that listening to the two-stringed erhu was “phenomenally uplifting.”

“It was at the highest caliber; it was fantastic; it was really refreshing,” said Ms. Peterson.

“It was incredible—almost like it wasn’t live—because it was so well done,” she said.