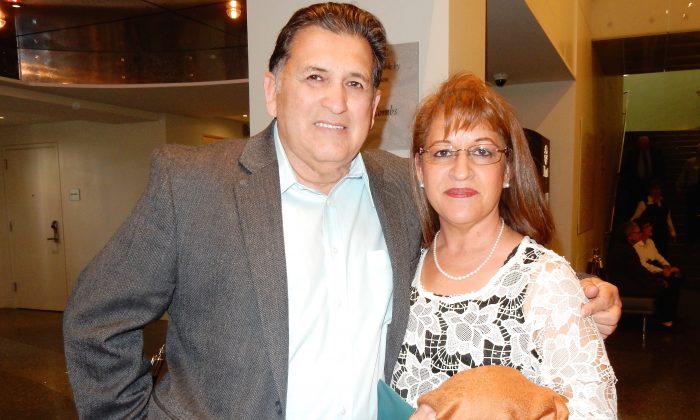 Among those in the audience was quilt designer Ms. Olivia Arispe and her husband, Mr. Joe Arispe, a professor at San Antonio’s Palo Alto College.

“It was enlightening … I’m speechless. It’s hard to find the words to describe the performance,” said Professor Arispe.

Ms. Arispe agreed with her husband and said, “It was an enriching show, very colorful and we enjoyed it very much.”

She continued, “I have never heard or seen the Erhu, and the music was a surprise, especially because it had only two strings.”

“I will definitely see another performance. I think Shen Yun opens your mind, teaches about other cultures and how they live and express themselves,” said Ms. Arispe.

Professor Arispe suggested that experiencing a different culture teaches people that an open mind is needed in today’s society.

He was amazed that “We can’t visit China and learn from them, but everyone from that country can visit us.”

She said, “I love Shen Yun. It’s beautiful, moving and very relaxing. It got beautiful stories and the costumes are fabulous.

Throughout every scene Ms. Willinghan felt that there was something “divine” and it “truly is a spiritual experience … I feel spiritually uplifted, close to the divine.”

“I love the pictures on the backdrop. They are amazing. The backdrops created such a beautiful scenery for the dance. I loved it,” said Ms. Willinghan.

Many in the audience mentioned that the backdrop was amazing, because it opened their eyes to another country’s landscape and life.

“The backdrops are magical windows to completely different realms. From vast open grasslands in one dance to the stately elegance of Tang Dynasty pavilions in another; from dusty yellow battlegrounds to tropical beaches to Himalayan peaks to picturesque scenery of the Yellow River Delta—the digital projection infinitely expands and transforms the stage,” according to Shen Yun’s website.

However, for Ms. Willinghan the most amazing thing about Shen Yun performers is that they wore such “colorful costumes. They are outstanding, beautifully made, sparkling and flowing.”

“The costumes cover up the person, which in my mind is very beautiful too. You don’t see lot of that nowadays, and I really appreciate that the artists are all covered up, and still so elegant, have so much beauty to present.”

Listening to an Angel

Shen Yun “was the best. It was elegant, … graceful, and the best show, I have ever seen,” said Ms. Garcia.

Shen Yun “was an amazing show. I would highly recommend this show.”

She continued, “Not only the dancers, but also the musicians and the singers were totally amazing.”

After she listened to the Erhu, she “couldn’t stop clapping.”

And the soprano,”I couldn’t believe that a singer being so tiny has a such powerful voice. It was like listening to an angel. It was just amazing, and it was so touching.”

“The song texts the singers perform are original works written for these pieces. Brimming with philosophical reflection about human life and containing deep layers of meaning, the texts go beyond the boundaries of nation, race, and culture, and have been fondly received and appreciated the world over. Some audience members even express that Shen Yun’s vocal pieces are reminiscent of sacred music,” said Shen Yun on its website.

Shen Yun “was beautiful and quite a few things touched my heart. For example the scenes The Power of Compassion and The Fable of the Magic Brush.

“Shen Yun’s mini-drama pieces draw upon stories and legends that span China’s history from the Yellow Emperor and through the Tang and Song dynasties and all the way to the modern day. A unique feature of Chinese civilization is that its history has been documented and passed down uninterrupted for 5,000 years, sometimes in vivid detail,” Shen Yun’s website states.

“I loved the performance because it was beautiful and very inspiring,” said Ms. Johnson.

He husband agreed and said, Shen Yun “was awesome, beautiful, and gave a very peaceful feeling.”

Shen Yun “helps you connect with the divine. The show makes me want to be a better person, and enjoy the beauty around me,” said Mr. Johnson, while his said that Shen Yun “was very uplifting, and it definitely lifted my spirits. I’m inspired to want to do better, and I’m motivated.”

Reporting by Stacey Chen and Heide B. Malhotra