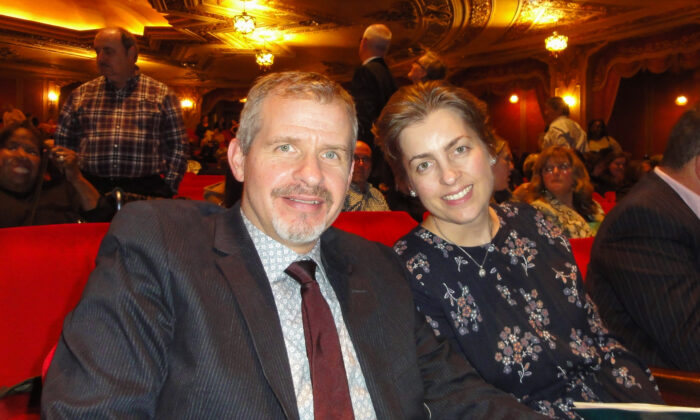 “[Shen Yun] was a beautiful way how dance represents life and life represents dance,” said Jason Ohlson, a business owner in the field of marketing.

Ohlson attended with his wife and the two described their appreciation of the performance’s artistry, historical elements, and its deeply spiritual dimension.

Ohlson waxed poetic when it came to the way in which Shen Yun’s dances and costumes interacted with the animated backdrops.

Shen Yun’s mission is to revive China’s authentic, traditional culture through masterful and sometimes ancient performing arts and share it with the world. That’s why its performances depict heavenly beings, celestial realms, and the legend of the Creator as well as stories from ancient China and modern-day China. China’s traditional culture has always believed that the divine plays a role in our everyday lives.

While Ohlson said Shen Yun’s overall storytelling effect is what struck him most, he appreciated the artists’ portrayal of faith very much.

“I think [Shen Yun’s divine culture] aligns with a lot of, I think, most cultures. You have your higher power, you have to overcome yourself, overcome your own problems and a lot of times you have to, you know, tap into your spirit or your faith and it helps to rise up,” he said.

Director Felt Inspiration When the Divine Appeared On Stage

David Smith is a director of theater and special events who attended the evening with two guests. He thought Shen Yun was beautiful and that it had excellent production value.

“The production levels are amazing. The video screen with the interaction with actors with the video screen, that’s pretty fun. … The costumes, the colors, the movements. The fabric, the way it moves. It’s part of the dance, the way it happens. So that was beautiful,” Smith said.

Like Ohlson, Smith noticed the stories that portray the Creator coming back to earth and rewarding good people.

“I think everyone needs to look at the little [bit of] divine in themselves. Yes, it is there. We get caught up in the rat race of day to day affairs and don’t even look beyond it; ‘Hey, wait a minute there is something better,’ so,” Smith said.

He said Shen Yun’s dance pieces that depict divine beings give “you things to think about. It makes you reconsider your day to day life and what’s going on and kind of thinking more about the inclusiveness in the world and everything, and not just about yourself but others.”

A few of Shen Yun’s dance pieces tell about the brutal persecution of Falun Dafa practitioners in China. Falun Dafa is an ancient spiritual discipline that teaches truthfulness, compassion, and tolerance and five energy-strengthening exercises. The Chinese Communist Party has carried out a campaign against its followers since 1999, perceiving its independence from the regime as a threat to the regime’s legitimacy.

“I always felt that this is a shame,” Smith said, in reference to the persecution. “I actually followed Falun Dafa before and I think it’s wrong for people to … Any other belief they have, especially when it’s something for the betterment of all the people, something not harmful, it’s actually helping everyone. And actually persecuting that, I don’t understand why. That’s simply other people trying to control somebody.”

“The beautiful costumes, the movements, I mean, the dancing is amazing. How graceful they are,” said Patrick, who is a doctor at a children’s hospital.

When she heard that Shen Yun means the beauty of divine beings dancing, Sharon said, “Oh, yes, the way [the Shen Yun dancers] moved so gracefully. I was noticing how quiet their feet are. You don’t hear, even when they jump you don’t hear their feet. They are beautiful.”

Sharon did hear something that night that she thoroughly enjoyed: Shen Yun’s beautiful music.

Each year, Shen Yun’s artistic director writes all-new original scores. Shen Yun’s seven touring groups are each accompanied by a full live orchestra and a very unique one at that. This performing arts company is spearheading new frontiers in classical music by deftly combining select Chinese instruments with Western orchestration in order to tap into Chinese music’s richly expressive and soulful sounds while delivering something highly accessible to music lovers everywhere.

“[The music] complements the dancing,” Sharon said. “The dancing is definitely the focus, like, you want to watch. I find myself wanting to watch one particular dancer, but then there is so much to see. It’s overwhelming. Really cool.”

With reporting by Sophia Zheng, Yawen Hung, and Brett Featherstone.