Shen Yun ‘Opened Up My Horizon’ 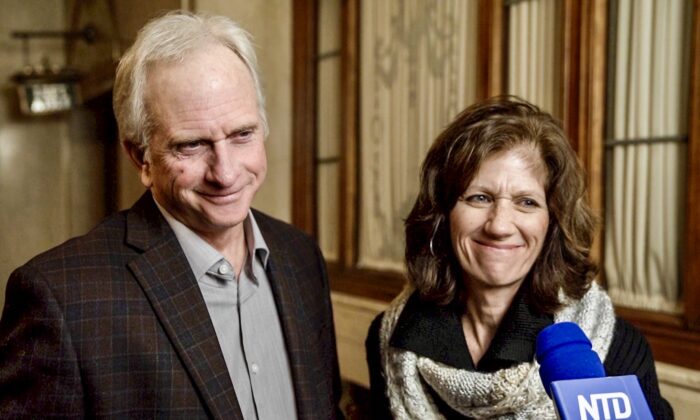 Dan Newcamp and his wife, Mary Sue Certo-Newcamp share thoughts about Shen Yun Performing Arts, at the Benedum Center for the Performing Arts in Pittsburgh, on Jan. 25. (NTD Television)

PITTSBURGH—Who would expect to find spiritual resonance in a theatrical performance? Who would expect that feeling to come from a performance with its roots on the other side of the globe? Dan Newcamp and Mary Sue Certo-Newcamp certainly didn’t expect it, but after watching Shen Yun Performing Arts, they felt that connection.

“I expected it to be visually stunning and it was. I did not expect … the spiritual aspect of it, which I really enjoyed,” said Ms. Certo-Newcamp at the Benedum Center for the Performing Arts on Jan. 25, 2020. She and her husband own their own roofing company.

Shen Yun may be based in New York, but the traditional music and dance, which it is renowned for, comes from China—and not from China today—but from a cultural heritage that reaches back 5,000 years.

Indeed, Shen Yun aims to restore both the classical, ancient arts of China, as well as its spiritual underpinnings. The civilization was once steeped in the understanding that man, nature, and the divine existed together in cosmic harmony.

Shen Yun reveals this spiritual legacy through short story-telling dances of some of China’s history, legends, and stories from classical literature.

This ancient Chinese culture felt inviting to Mr. Newcamp. “Watching this today, I guess in my mind, I was thinking you know, if I was to travel and spend two weeks in China and get away from the big cities—not in the big cities, but get out into the suburbia, into the country in China—would I encounter this [kind of culture?] Because if that’s the case, I would really like to go there,” he said.

It is not likely that he would. Once woven into the culture, traditional Chinese spirituality is all but gone today in the Mainland, brutally dealt with by the atheistic communist regime now in power, according to Shen Yun’s website.

Ms. Certo-Newcamp was surprised to learn both about the spirituality of the Chinese culture and how it’s been repressed: “So that was a very, very pleasant surprise and I was glad to learn the history and to learn more about it,” she said.

“It raised a lot of questions for me that I want to go and do some research, which I do frequently after seeing something that opens up my horizon.”

“This really opened up my horizon,” she said.

Many of Shen Yun’s performers are practitioners of Falun Dafa, a meditative discipline, made public in 1992, that cultivates the principles of Truth, Compassion, and Forbearance. Because the spiritual discipline was so popular in China, by 1999 more people were practicing Falun Dafa than were members of the Chinese Communist Party. Since that time, Falun Dafa has suffered severe persecution in an attempt to eradicate it.

Some of Shen Yun’s short dances show the plight of Falun Dafa in China today.

“We are Roman Catholics as far as our faith,” Mr. Newcamp shared. Yet he felt many parallels between his own faith and what he was seeing on stage.

“You know, we agree with everything that we see … when we’re watching [this] show; we agree with all of that. It makes me want to go back five millenniums and start there myself,” he said.

“I was thinking something similar to that,” his wife said.

“We … agree there’s a Creator and that we are created for something more, and to get to Heaven. That’s what I was thinking. And as Dan said, it is very similar. We go about it maybe differently. But those virtues that the show is espousing are the same virtues that our faith espouses, as well,” she said.

“So that was comforting,” she said.