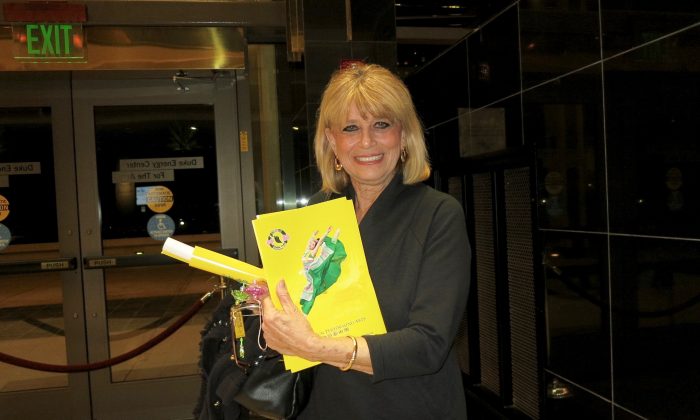 Kathryn Kranz was inspired by the message of hope Shen Yun portrayed through song and dance on Jan. 13, 2016, at the Mahaffey Theater in St. Petersburg, Fla. (Sally Sun/Epoch Times)

ST. PETERSBURG, Fla.—”You didn’t need to know the language, because you felt it in your heart,” said Kathryn Kranz, referring to her experience of listening to Shen Yun Performing Arts and its distinctive vocal performances.

Shen Yun’s music is renowned for successfully combining the sounds of East and West—a feat hard to do. Along with the live orchestra and use of ancient Chinese instruments, the vocal performances have a strong impact, and they share deep messages.

Ms. Kranz, a registered nurse, walked away from Shen Yun’s Jan. 13 performance at the Mahaffey Theater in St. Petersburg with a smile on her face and music in her heart.

“It was so touching,” she said. “Between the music, the costumes, the lovely, lovely dancers—I will take this with me for a very long time, and I thank [the artists] for that.”

As with most who view a Shen Yun performance, Ms. Kranz was taken by the eloquence and color of the performance onstage: the song and dance, the legends and stories.

But mostly, she was inspired—moved to a deeper level of thought about where we have come from and where we are headed.

Tonight Shen Yun Performing Arts International Company brought to life 5,000 years of ancient Chinese culture. With such a great history before her, it seemed natural Ms. Kranz would ponder the past.

“It made you think,” she said. “It brought you to a different atmosphere.”

But Shen Yun not only tells stories of ancient legends, it also portrays modern-day tales of heroism that likewise express deeply rooted values and spiritual traditions—elements that, if embraced, could help society today.

Ms. Kranz was inspired. Shen Yun left her with a good feeling, she said.

Ms. Kranz said she listened to every word of the lyrics during the vocal solos as she read through the translated words projected on-screen.

“Brimming with philosophical reflection about human life and containing deep layers of meaning, the texts go beyond the boundaries of nation, race, and culture, and have been fondly received and appreciated the world over,” the Shen Yun website says of the lyrics in the vocal performances.

Even the song titles—”The Path to Heaven,” “For What Is Life,” “The Choice,” and “The Only Hope”—offer a deep message and point to what Ms. Kranz picked up on as a message of hope.

It absolutely gives you hope, and that’s why I think everybody left with a smile on their face.
— Kathryn Kranz

“It absolutely gives you hope, and that’s why I think everybody left with a smile on their face,” she said. “Yes, maybe tears in their eyes, but tears of joy.”