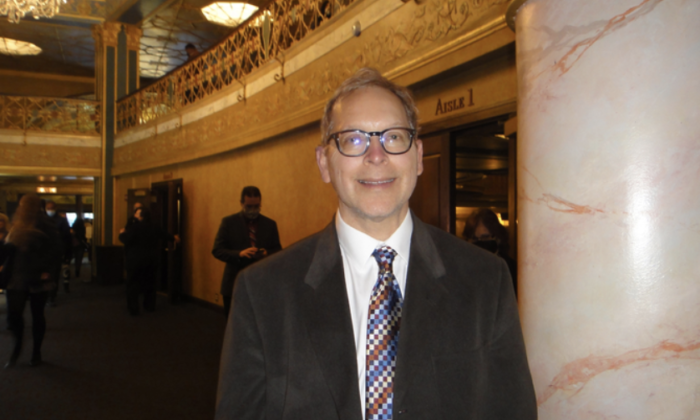 Psychologist Howard Berlin was glad to see people come together to experience a sense of community. “People now are feeling depressed because they feel more isolated and alone,” he said. “And when you come to something like this, you see people coming together and the beauty of community.”

New York-based Shen Yun is a global classical Chinese dance and music phenomenon that has been sharing a message of hope with the world on its global tour since 2006. It performs in over 150 cities each year with a brand-new program. Bringing to life traditional Chinese culture with colorful costumes, original music performed by a live orchestra, and breathtaking dance numbers, audience members often remark how Shen Yun is a one-of-a-kind experience.

Berlin himself got a boost from seeing the show. “I feel lighter, mentally. I just feel lifted, like I’m seeing something beautiful and bigger than me and bigger than everything going on in the world,” he said.

Shen Yun‘s overarching message is one of faith, hope, and renewal. Its mission is to revive 5,000 years of Chinese culture as it was before communism. In its program, Shen Yun shows the contrast between the glory of China’s heritage versus present-day life under the communist regime.

Immerse Yourself in Love and Compassion

Taiya Himebauch, a color and sound therapist, remarked on the effect Shen Yun’s music had on her body and mood.

“I can feel the physical changes of music in your heart,” she explained. “So during the soprano’s piece, I closed my eyes so I wasn’t feeling the color, and I just felt her music. And I felt muscles loosen in my chest and throat that have needed to loosen for a while, and I felt openness. I felt breathing [was] easier and I just felt beautiful … I felt the beauty of her voice.”

Himebauch said the performance made her feel beautiful again.

“I feel elevated, I feel like I’m in a better mood … The music made me feel beautiful again on a soul level,” she said.

You want to be bright, you want to be light. So whatever it takes to bring that light in, do it. And this is an easy way: the price of a ticket.
— Taiya Himebauch

Himebauch pointed to studies by Japanese researchers that indicate how the music you listen to influences the structure of molecules in your body.

“I’m a chemist, and if you listen to hate and distrust and you’re angry, the water in your body also changes, and you don’t want that. You want to be bright, you want to be light. So whatever it takes to bring that light in, do it. And this is an easy way: the price of a ticket.”