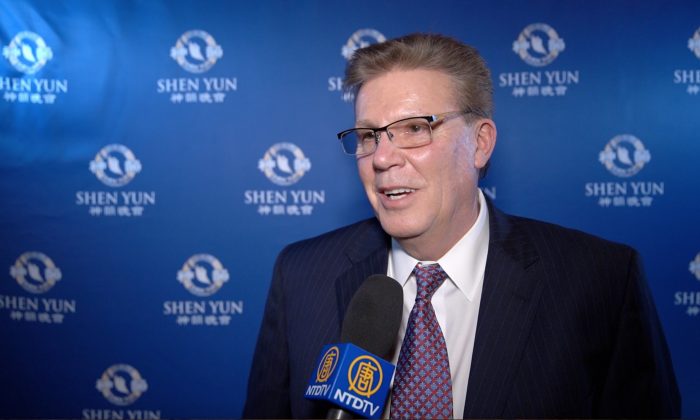 Rick Leidal said he was never so happy as in giving the gift of Shen Yun Performing Arts. He saw the performance at the Detroit Opera House on March 6, 2019. (NTD Television)

“The colors, the precision—it was beautiful,” he said with emotion, at the Detroit Opera House on March 6, 2019.

Mr. Leidal, a financial planner and owner of Insight Financial Group, had a special reason for attending Shen Yun. He’d wanted to give his now 18-year-old niece, originally adopted from China, a gift.

“I wanted to do something really special, but I didn’t know how to do that,” he said. He didn’t want to give her just another gift, another thing.

“But what I did here, I brought her back to China. And I thought this was an amazing, amazing gift. And as it turns out, elbow to elbow with Mindy, I’m so thrilled that I could give her something besides some gift.”

The gift he gave her, from his perspective, was a new awareness and respect for her lost heritage.

“The respect of China, the beauty of it—all I can say it is, it was an outstanding performance. Outstanding,” he said.

New York-based Shen Yun takes the audience on a journey from the inception of China’s 5,000 year history, through several of its dynasties up to the present day. Along the way it presents a parade of colorful figures: imperial guards, palace maidens, monks, and mystical beings, all to showcase the values of a culture steeped in spirituality.

In ancient China, according to the program notes, “artists used to cultivate virtue. They believed that art was meant to celebrate the divine and nurture goodness. They often practiced meditation and self-refinement, seeking to create art from a pure and humble mental space.”

Almost all of this rich tapestry of culture that Shen Yun conveys is through the art of dance—most often through classical Chinese dance, known as much for its grace and synchronicity as its energetic sets of technically demanding turns, jumps, and flips.

A New Way of Looking at Things

The thing that most stayed in his mind, what he would take away from the performance, Mr. Leidal said, was respect, respect for China.

He seemed to feel that Shen Yun could show people a new way of looking at things. “The … things that you do in life, it’s the same, same, same. But this is not the same.”

“You know, we are so bold, and we think that things are a certain way. [But] you’ve got to have respect for people in life, for other cultures,” he said.

“And this is a different way of looking at things. That’s how I feel.”

The Shen Yun company aims to revive traditional music and dance, but it does so from the very core of its efforts. The very basis of everything the performers do is a heartfelt attempt to restore the joy, wisdom, and the values of ancient China. Many of its performers meditate and live their lives by spiritually informed principles, very much like those in ancient China did, with a respect for the heavens, earth, and humankind.

It would seem that a great deal of that effort reached Mr. Leidal.

“If you had not [seen] this, I think you’re missing out on something in life,” he said.

“I would just implore everybody to consider going,” he said. “Spend the money. You will not be disappointed. That’s my feeling.”

Overwhelmed, it seemed, by what he was feeling, he said: “I just wanted to say that it’s heartfelt, and I’ve never felt as good as this night, giving this gift.”

With reporting by NTD Television and Sharon Kilarski