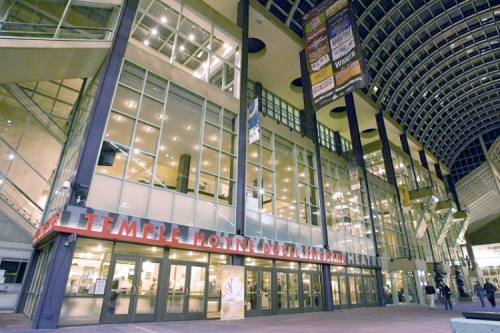 The Buell Theatre at the Devcer Centre for the Performing Arts, Colorado, where Shen Yun will be performing from March 6-8. (Yuan Ji / The Epoch Times)

The Mile-High City will get another peak above the clouds this weekend, as Shen Yun Performing Arts brings the wonders of ancient Chinese culture to stage at the Buell Theatre.

New York-based Shen Yun, founded in 2006, has been coming to Denver for the past six years.

This year’s four performances, staged on March 6 to 8, are nearly sold out, a sign that “It is super popular right now,” said Joy Zhao, president of the Falun Dafa Association of Colorado, the non-profit that is hosting the performances.

The Falun Dafa Association, among other things, is dedicated to the preservation of Chinese traditional ethics and arts.

Shen Yun performances are a pageant of vibrant colors; graceful, energetic dances; beautiful scenery; and stirring music from a live orchestra that combines both traditional Chinese and Western instruments.

Shen Yun’s goal is to revive traditional Chinese culture, which was nearly lost in China  in the sixties and seventies during the Cultural Revolution.

Bearing is what allows classical Chinese dance to tell stories in an impactful way. “[To] nimbly portray movements from daily life, as well as profoundly express the innermost transformation of one’s emotional state,” the website says.

This year the mayor of Denver and six other surrounding cities issued proclamations welcoming Shen Yun and acknowledging the importance of it’s mission.

“The Shen Yun production will be performing in Denver for the sixth consecutive year, once again delighting audiences with the grace and beauty of the production,” reads the proclamation by Denver mayor, Michael Hancock.

“The City of Aurora recognizes the important role the show and the [Falun Dafa] association have on our citizens in the quest to entertain, educate, enrich, and inspire beyond cultural boundaries,” reads the proclamation from mayor Stephen Hogan.