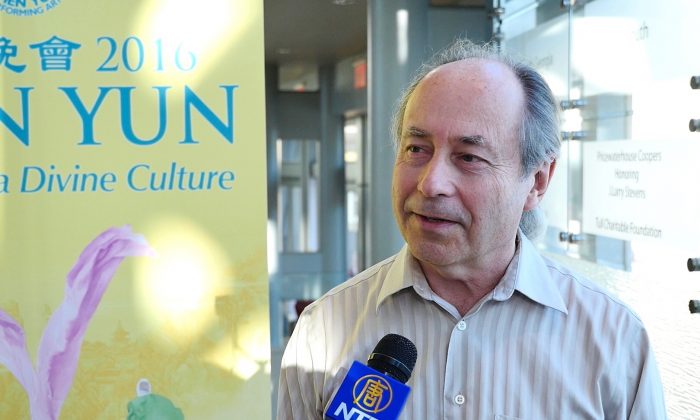 ATLANTA—As a composer and having played in a symphony orchestra, Mr. David Silberman was most drawn to the music by the Shen Yun Orchestra during the Shen Yun matinee performance at Cobb Energy Centre on Jan. 16.

“To he honest, I was watching the orchestra more than the stage,” said Mr. Silberman, who works at Delta Airlines and is looking to write music for motion pictures.

Accompanying the various classical Chinese, ethnic, and story-based dances is the music of a live orchestra that combines Eastern and Western instruments to create a unique sound, a sound that Mr. Silberman feels is “very exciting to be able to hear and enjoy.”

Mr. Silberman especially liked the pipa and the erhu, two Chinese instruments that he feels produce “a whole different sound than what we hear over here in the United States.”

“I’d like to write some compositions with those two instruments together and maybe some other instruments as well,” he said.

The pipa, or Chinese lute, is known as the “king of Chinese instruments,” according to the Shen Yun program book. The plucked, four-string instrument has an expressive range that allows it to play “anything from delicate melodies to intense battle sounds.”

The erhu, a two-stringed bowed instrument, is no less expressive.

“In its lowest and middle range, the erhu is especially stirring and somber, a quality eminently suitable for conveying the grand pageant of China’s history and the emotions of its people,” states the Shen Yun website.

Mr. Silberman notes that the erhu does indeed “give it that different worldview.”

“It kind of transports you into the world of China and the East.”

Reporting by NTD and Larry Ong