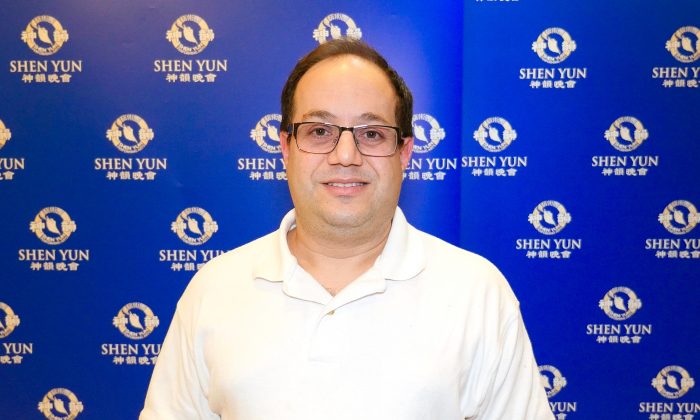 NEW YORK—The lights dim, the theater palpitates with energy, and the conductor deftly lifts his baton to signal the musicians to begin. The ring of the gong, a traditional Chinese percussion instrument, pierces the silence.

What follows is an energetic, mellifluous harmony of classical Chinese instruments like the pipa and the erhu combined with instruments of a traditional Western symphony. This unique blend of sounds cascades through the theater, enthralling audiences, as the curtains rise to reveal a heavenly scene of dancing on stage.

He loved everything about the performance, from the skillful dancing to the vibrant, hand-made costumes. But as a musician, he was most captivated by the musical side of the performance.

Mr. Solomon had seen New York-based Shen Yun perform last year as well. He enjoyed the music of the performance so much he immediately purchased the orchestra CD. Now he regularly listens to Shen Yun’s compositions while driving.

As Shen Yun conductor and composer Gao Yuan said in an interview, within the Shen Yun orchestra, “you’ll hear the grandeur of the Western symphony, along with the unique, ethnic infusion of traditional Chinese instruments.” The idea was pioneered by the Shen Yun company and has never been done before.

Many audience members around the world, like Mr. Solomon, have praised Shen Yun for this refreshing and innovative approach to music. “It’s just wonderful, the mixing,” Mr. Solomon said. “I loved the way the oboe worked with the Chinese percussion. If you just told me that, in my mind imagining that, I would not think it would work. But it works beautifully—absolutely wonderfully.”

He particularly enjoyed the performance of erhu virtuoso Qi Xiaochun. The erhu, sometimes referred to as the Chinese violin, is a classical Chinese instrument with only two strings. It is nonetheless immensely expressive.

“I was just blown away by the effortlessness. As a violinist, when we have to play a pizzicato, we can hold [the bow] and pluck. But [the erhu  player] had to balance the bow on her legs while plucking with one hand on the two-stringed instrument. That was unbelievably technically difficult, and she did it effortlessly,” Mr. Solomon said.

He also praised the singers of Shen Yun for not just their technical skill, but their power, and the profound spiritual messages conveyed through the lyrics of their songs. “It was just a completely powerful performance. It was really very moving mentally,” he said.

Shen Yun, a New-York based company, strives to revive and preserve a traditional culture nearly crushed by the Chinese Communist Party’s policies in the past century, and Mr. Solomon greatly appreciated these efforts.

Growing up in New York, Mr. Solomon said he had little understanding of what the communists really did—erase a culture. Nor did he understand what traditional Chinese culture was, as in the West we could only catch glimmers of it here and there.

“It’s important to preserve heritage. It’s amazing. I had no clue there were 5,000 years of such beautiful history [in China],” Mr. Solomon said.

The violinist felt Shen Yun offered a richly artistic and cultural experience, as well as a heartwarming message about goodness and faith and beauty. “By bringing this out for people to see, it not only spreads the message, but also spreads the beauty. Good will come from it—from both the musical message and the spiritual experience.”

And Shen Yun’s appeal is not limited to only adults. “This is one of the few things you can bring children to that is completely at every age level,” Mr. Solomon said. He had brought his two children, one 8 and the other 11, to see the the performance last year, and the two greatly enjoyed it.