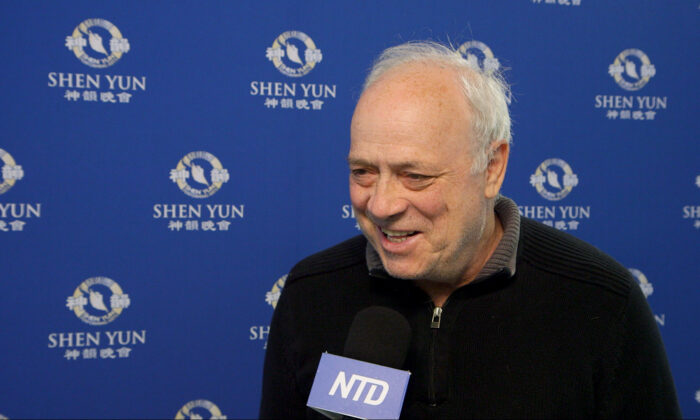 “It is my first time [seeing the concert], but it certainly won’t be my last. They’re amazing,” he said.

The Shen Yun Symphony Orchestra, which consists of musicians from Shen Yun Performing Arts, debuted at Carnegie Hall in New York City in 2012. The Orchestra has since toured to popular acclaim in Asia, the United States, and Canada.

“I’m a great music lover and this orchestra is artistically meticulous. Beautiful, beautiful artistry,” he said. “The musicianship is excellent, but the spiritual quality [also] comes through, and my soul—and I think everyone else’s—is enriched by being a participant in this beautiful music.”

Schipper is a veteran theatre director in Canada. He served 30 years as the artistic director of the Royal Manitoba Theatre Centre, before taking leadership of the Rose Theatre this year. In 2012, he was appointed to the Order of Canada for his contributions to Canadian theatre. He has also received the Queen’s Diamond Jubilee Medal, as well as Honorary Doctorates of Letters from both the University of Winnipeg and the University of Manitoba.

As he listened to the Shen Yun Symphony Orchestra on Sunday afternoon, Schipper said he felt privileged to see the concert.

“They are magnificent. One can feel the excellence of the artistry and one senses that we’re in a very special place in time and very fortunate to be here,” he said.

Many of the pieces performed by the orchestra are original Shen Yun pieces that were initially composed to accompany dancers on stage. They take the audience through a tour of China’s history, from its ancient origins to contemporary times.

“It’s an extraordinary experience to celebrate China’s 5,000 year history. The music is evocative and spiritual,”said Schipper.

He highly recommended the Shen Yun Symphony Orchestra to anyone who loves great music.

“Make sure that you see this wonderful orchestra in your lifetime, and once you see it you will return. The people sitting next to me are here for the fifth time. I’m not surprised, I will return as often as I’m alive,” he said.