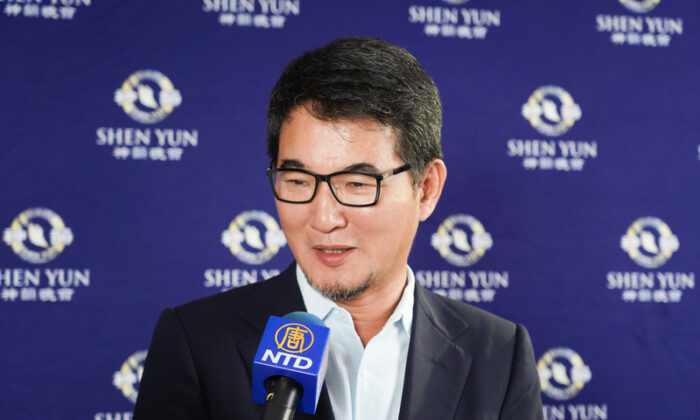 “Listening to the melodies, I felt like seeing the scenes of the overwhelming momentum of a formidable force, and all of the cells in my body seemed to be rejuvenated,” he said after seeing the performance.

“I admire these musicians for their ability to play such touching melodies that can make the audience feel like they were in the scene in person,” he said. “I think that’s the highest level of musical performance.”

Mr. Liu added that Shen Yun music is full of energy and his soul is cleansed by listening to the music. “I think [the Shen Yun concert] can cleanse human souls,” he said. “During the process of listening to such powerful melodies, I felt like I was taken to another dimension.”

Explaining his impressions of the music, Mr. Liu said each piece could be related to an era of history or recounting a story relevant to the present day, and said he hopes more people can listen to the music.

“I feel every piece is very touching,” he added. “My overall feeling is that besides the conductors, all of the other musicians are also very dedicated, so that they can perform such soul-inspiring music.”

Mr. Liu added that it’s thanks to the Shen Yun artists’ dedication and hard work that “such beautiful melodies can deeply touch every audience member,” and thanked the musicians for their dedication.

“As [Shen Yun music] can cleanse human souls, I really hope that Shen Yun Symphony Orchestra can perform in Yunlin more often, so that Yunlin’s [artistic level] can be upgraded to international standards,” he said.

“In a nutshell, politicians should find time to attend Shen Yun concerts, in particular those who are planning to run for the elections,” he said, “so that they are able to have more righteous minds and gain more momentum to serve this country and the people.”