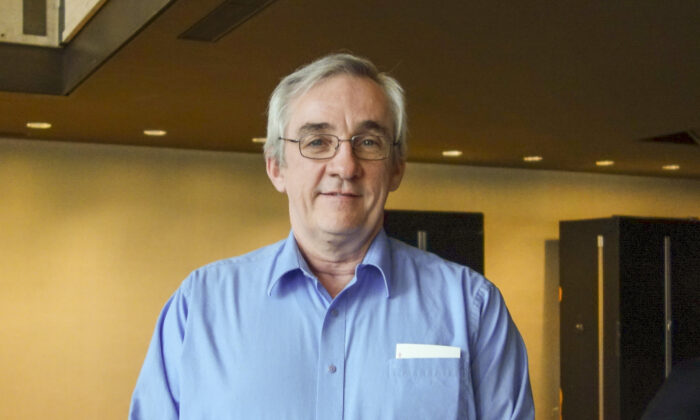 NEW YORK—The flying leaps, flips, and mid-air tumbling techniques characteristic to classical Chinese dance make it seem like time has slowed and gravity has gone. These jaw-dropping feats from the thousands of years old dance form are the predecessor to sports like acrobatics and gymnastics, and frequently send Shen Yun Performing Arts audience members into spontaneous applause.

“Exhilarating is probably a good word for it,” said telecom executive John Tweedie at a matinee performance at Lincoln Center on March 11, 2020. “I loved it so far—I know there is the second half to go, but I felt they took us to China.”

It is indeed New York-based Shen Yun’s mission to revive the divinely inspired traditional Chinese culture, and each two-hour performance presents a journey of sorts through 5,000 years of history.

Friends of Tweedie’s had recommended the performance to him, and he was more than glad he attended and got the opportunity to be acquainted with this ancient culture.

Tweedie appreciated the spirituality of traditional Chinese culture, one where harmony is emphasized between heaven, earth, and humankind.

“It was very touching,” Tweedie said of the presence of the divine in the stories Shen Yun shared through dance. He was particularly moved during a contemporary story, which depicted followers of the spiritual discipline Falun Dafa, and how they face persecution today in China, which is a communist state.

Tweedie said he felt sorry to hear the persecution is ongoing and was emotional as he recounted the events of the tale.

“You know I wanted to cry when I watched it,” he said. But ultimately the story showed hope and a continuation of the traditional culture’s faith in the divine. “I could feel even when the [tragic] story … they were looking at the divine for this to happen.”

Shen Yun’s mission was a worthy one, in Tweedie’s eyes.

“It’s wonderful,” Tweedie said. “I would love to see more of this around so we could see what is going on on the other side of the world.”

Bill and Maureen Olsen, both retired theater performers, were also in the audience Wednesday afternoon and uplifted by Shen Yun’s divinely inspired performance.

“It’s very ethereal, very inspiring, and that there’s hope,” Maureen said. “It’s just, with any kind of faith, you can get through anything. It was just breathtaking.”

Through the performance, the Olsens felt they got a glimpse at the authentic culture of China.

“Got the true feeling of the whole history of China,” Bill said. The traditional culture is one with its foundation in values like compassion, integrity, and reverence for the divine—universal values that the Olsens felt inspired unity rather than divisiveness.

“Hopefully the whole world can start seeing itself in one place,” Bill said.

“It’s a powerful message,” Maureen added. She said they not only saw the history, but what the ancient history has inspired, such as those flips and leaps in classical Chinese dance that have since inspired things like olympic gymnastic feats.

“It just seems like all of the dance in the world was inspired by China, by the history. It was very moving,” Maureen said. As she watched, and she listened, she was moved.

“It brought tears to my eyes—I don’t know what the emotion was, it was just an overall emotion,” Maureen said. “Very calming—it’s healing.”

With reporting by Janita Kan and Sally Sun.