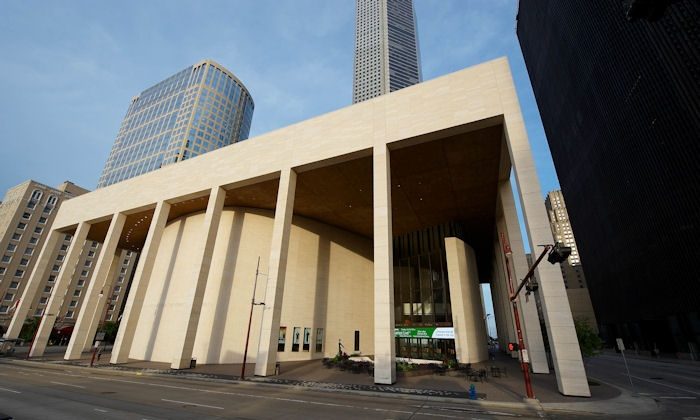 HOUSTON—Singer and saxaphone player Evelyn Rubio was moved to tears by the vocalists of Shen Yun Performing Arts at the Jones Hall for the Performing Arts in Houston, Dec. 26.

“They can make you cry, but they’re worth it,” Ms. Rubio said of the sopranos. “They make you think a little bit, about what is the meaning of life.”

It’s an uncommon style to sing Chinese lyrics—and highly difficult—which resonated with Ms. Rubio, as a singer herself.

The sopranos’ songs were filled with deep layers of meaning.

Listening to the vocalists, Ms. Rubio said it made her think to be compassionate, and “to really choose the right things in your life.”

Shen Yun Orchestra, too, made an impression on Ms. Rubio. The instrumentation is unique, blending Chinese instruments and a Western orchestra.

“I appreciate the new sounds,” Ms. Rubio said, adding that she felt the music told the story just as well as the dances did.

Also in the audience was Patricia Degrace, who attended the performance with her mother-in-law, Gigi Degrace-Mayaa.

“I loved it, it was wonderful, wonderful. Very colorful and energetic and the dancers were exquisite,” said Ms. Degrace.

Ms. Degrace, who is a caregiver for her husband, a wounded veteran, said watching the performance made her want to see Shen Yun more often, and bring her husband.

“They do really ignite your thinking about life and energy,” Ms. Degrace said. “And they really inspire your desire to want to come more.”

“When you leave here, you want to do things that create a good life, a beautiful life, and a graceful life,” Ms. Degrace-Mayaa said. “That’s the way this makes you feel.”

“It was graceful, vibrant, beautiful,” she said.