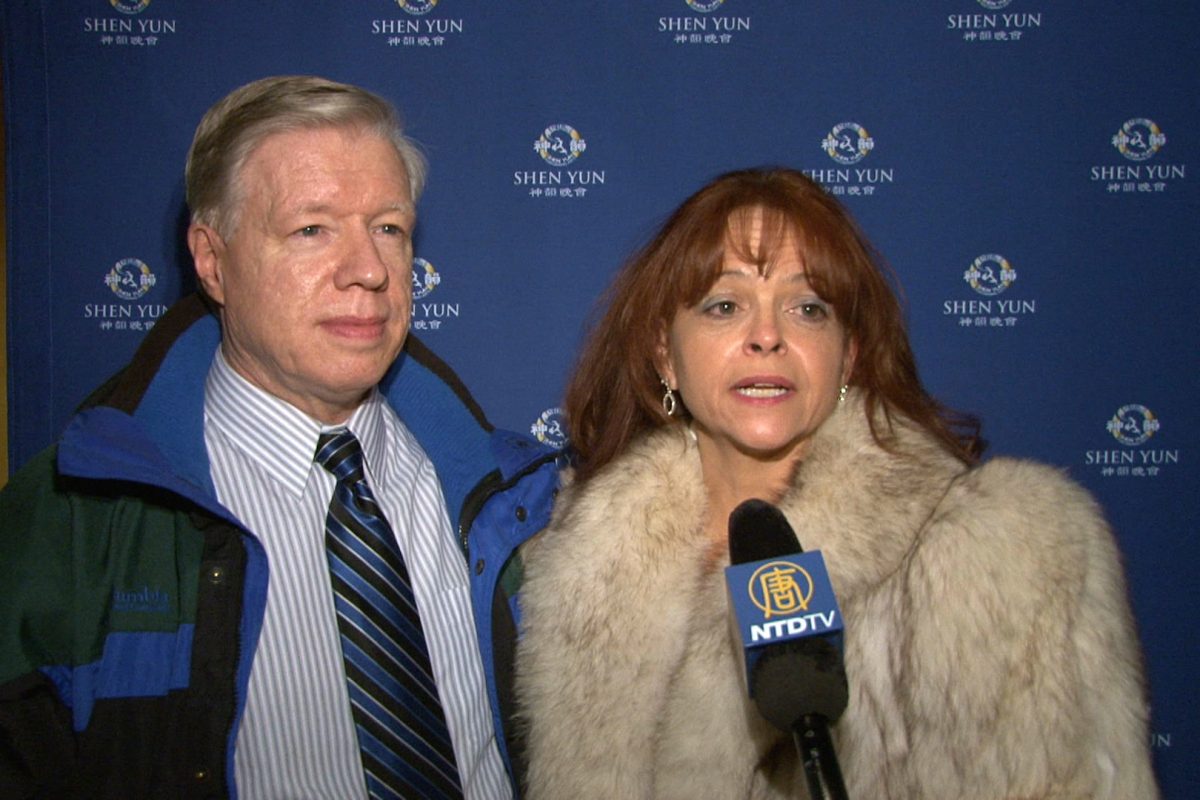 Tess Sharpe and Mark Dearry at the Duke Energy Center For The Performing Arts on Jan. 28, 2015. (Courtesy of NTD Television)
Shen Yun

RALEIGH, N.C.—Shen Yun performing Arts stopped in Raleigh for two nights at the Duke Energy Center For The Performing Arts from Jan. 27 to 28.

The New York-based company, with its breathtaking and colorful performances, enriched with stories and legends from ancient China all the way to the present, moved audience members to praise the beauty they saw before their eyes, and for some, even to shed tears.

Tess Sharpe was one of those in attendance on Wednesday Jan. 28 who was moved to tears from the performance.

“It was wonderful, I mean it was breathtaking—the …performance and seeing other cultures—I cried, so emotional, so beautiful. I would come back again and see it,” said Ms. Sharpe, who works as an office assistant.

“I recommend it to anybody else that has not seen it to see it. It was beautiful. I enjoyed other cultures, seeing the storytelling that was being told; the magic performed on stage was just awesome.”

This magic in Shen Yun also captured Mark Dearry’s heart. Formed in 2006, Shen Yun presents classical Chinese dance and music to preserve China’s divinely inspired culture—a culture that has been all but lost under decades of communist rule in China.

“When divine prominence overrules communism suppression—the fable stories that were told in order to enforce that and bring it back to the people of China—It was just a wonderful performance,” said Mr. Dearry, who is now retired.

“The stories that were told were just amazing, the way they blend in theater to dancing and even the backdrop and how they used the scenery in the midst of everything told, it was just fantastic,” he said, referring to Shen Yun’s use of animated digital backdrops that interact with the dances and set the stage with breathtaking scenes.

“I just hope the people realize what happens in communist China now and how the people want freedom. It was just a beautiful story.”

Shen Yun travels each year around the world, from Oceania to North America, showcasing its exhilarating performances with all new programming.

“They can see the happiness, the enthusiasm, of [the Chinese] people, their culture, and their dance. I think it’s just a wonderful story,” he said.

“The combination of the music and everything blending together so well—it was very beautiful and delicate,” Ms. Ragland said.

“The art design was awesome.”

Elaborating further, Ms. Ragland said she admired Shen Yun’s use of the animated backdrops that interact with the dances with animation.

“The graphic design where they actually have the background with the board with the digital animation—to have people jump from the screen onto the stage, that was just so beautiful,” she said.

Shen Yun, Ms. Ragland said, is “definitely a experience you have to see for yourself.”