Shen Yun ‘Most Euphoric Experience’ Ever 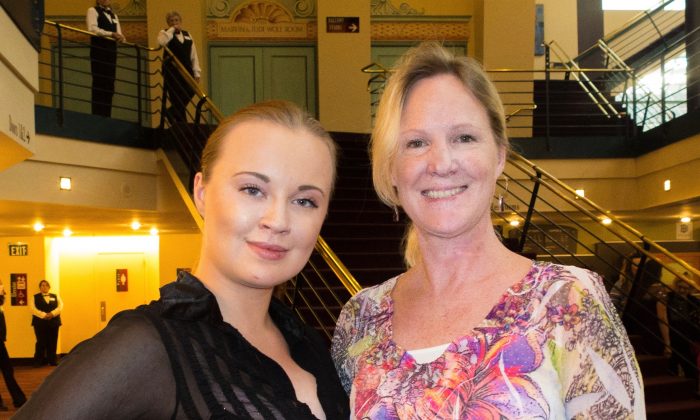 DENVER—Tracy Vermillion has seen Shen Yun Performing Arts three times and believes it carries within the essence of the performance a message that is crucial to the world today.

“We need to get back to what’s real. Believing in ourselves, and believing in what we can do without being so materialistic,” Ms. Vermillion said at The Buell Theatre on March 6. She brought her daughter Sky Coplien, who was seeing the performance for the second time, as a birthday gift.

“That’s what I said, every year, forever,” Ms. Coplien jumped in. The mother and daughter spoke enthusiastically of the inspiration they felt seeing the performance, and how they would be discussing it all through dinner that evening.

“This is the most euphoric experience I’ve ever had. I love it. It’s just my favorite thing ever,” Ms. Coplien said. “The culture, the experience, the feelings, everything about it. I just love it so much. It’s very emotional, very touching and I look forward to it.”

When the curtain lifts, you just feel ready for anything, Ms. Vermillion says.

During the opening scene, Ms. Vermillion felt her heart open up. “I feel super ready for whatever it is going to tell me today.”

“It just feels invigorating,” she said. “Actually, it yanks at my heartstrings. I  get a little teary eyed sometimes … I feel excited.”

“When the show opens, I sit there like everyone else, and then everything just opens. My well being, my mind, my consciousness, my eyes bulge out of my skull and I just get so excited to see one thing after another and just understand it all. I just love it,” she said.

And having just finished watching the performance, Ms. Vermillion felt like dancing herself, and skipping down the street.

Ms. Coplien says the Shen Yun experience is one of divinity. It’s in the company’s very name—“shen” means divine, and “yun” is the feeling behind a movement. Fitting for a group of artists whose mission it is to revive the divinely inspired Chinese culture of 5,000 years through the performing arts.

Shen Yun draws on this culture to put together a completely new performance every year. Principles that guided ancient Chinese society like wisdom and propriety, benevolence and justice, good prevailing over evil, and divine retribution are present in the stories and dances that show China’s diversity—over 50 ethnic groups with their own cultural dances—and dynasties through the ages.

Ms. Vermillion said there was so much to learn from that ancient past in today’s world, and this performance would serve as a reminder for people of any culture of their innate spirituality and higher purpose.

“There’s more to life than just your every day,” she said. The presentation of the divine culture showed her what it meant to be human, no matter your culture, and how deeply belief plays into it. “As long as you have a belief system, I think it keeps anybody stronger.”

Ms. Coplien felt the performance showed the truth of everything, and it brought her to such understanding that it made her cry.

The performance touched her on “every different level that you could imagine” and during “every single moment!”

Ms. Vermillion agreed; she said she had felt deeply that in the modern age many people are ruining themselves, bringing each other down, or demolishing the world. It’s the harsh truth, she said, but Shen Yun shows where the fine line is and how to get back on track.

“It makes you think twice about the modern world, where your roots come from, who we are as a people, and what we’re doing to our world,” she said. “I think it got it to where everyone could understand it. You can’t not understand, not come away with something. It’s a positive thing. It’s all positive.”

“We need to remember we’re human,” she said. “It does give me hope. I’m just hoping it spreads out to other[s].”