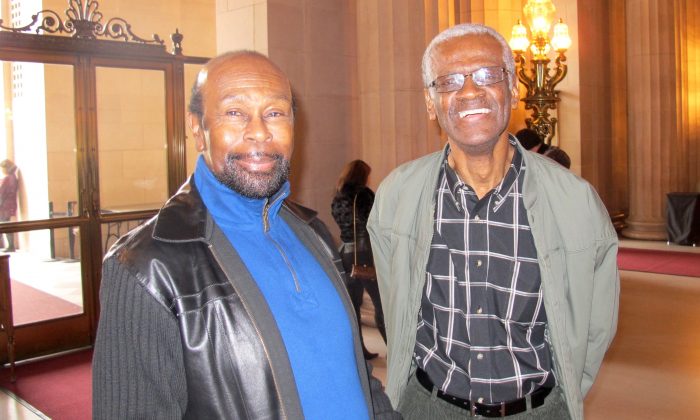 “I enjoyed everything from the beginning to now. I’ve never seen anything like it,” he said. “It’s great! Totally enjoyed it.”

Mr. Williams, also retired, used to work with computers. He agreed with Mr. Dao, saying, “The pageantry of it! The staging! The color! It’s spectacular.”

Shen Yun is based in New York and is the world’s premier classical Chinese music and dance company. Classical Chinese dance is at Shen Yun’s heart, wherein mini-dramas bring glimpse of China’s thousands of years of history and culture to the stage. The company incorporates pieces with folk and ethnic dance as well.

The two friends appreciated the ability of the many dancers on stage, who each danced as individuals but still presented a complete image together.

Kelly Libby, a traveling nurse, and Bruce Dallagher live in a RV and are touring the country. They were very pleased to have seen Shen Yun.

Mr. Dallanger also used the adjective magnificent, referring to the colors onstage. “The background was really fantastic,” he said.

The couple appreciated the beauty, the variety, and the mini-dramas. In fact, Shen Yun left them wanting more.

According to the website “Shen Yun dances recount ancient myths, bygone heroes, or celestial paradises. Whether set in the past or in contemporary China, every dance embodies traditional Chinese values. Ideals of loyalty, filial piety, and veneration for the divine are cherished and celebrated. Heroes are extolled for their compassion and tolerance as much as their courage or determination when facing adversity.”

“It was very educational. I can’t wait to go home and read the rest of the program,” said Ms. Libby.

Mr. Dallagher added, “It is wonderful that the Chinese culture is brought here. Just opened my eyes to the differences of all the people and yet we all have the same goal.”