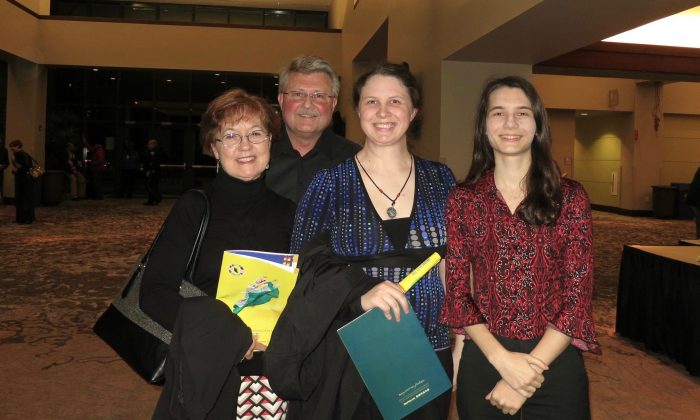 NORTH CHARLESTON, S.C.—”It is not a performance,” said Leslie Harrelson, after seeing Shen Yun Performing Arts. “It is really a sharing of their joy from the inside, to tell these stories and to say it is still alive! It is still pertinent today!”

The traditional, spiritually imbued culture of ancient China is alive and well ever since 2006 when like-minded leading artists gathered in New York to form Shen Yun. Ever since, the company of dancers and musicians travel the world, sharing performances that audiences call stunningly beautiful.

Ms. Harrelson, an administrative assistant, was thrilled to see Shen Yun in Charleston after missing it in Greenville, N. C. in July. She, her husband, and two friends finally saw the last performance at North Charleston Performing Arts Center on Jan. 27, before the classical Chinese dance and music company moved on to Syracuse.

The three ladies became friends through the arts, and fittingly saw Shen Yun together.

Mrs. Harrelson, also a personal trainer, keyed in on the athleticism of the dancers. “I don’t think people realize in the costuming, that you have to have such athletic [ability], just to pull the long sleeves up and then to bring them back and all. It was so beautiful,” she said.

She was commenting on the dance “Sleeves of the Sui Dynasty,” In which maidens wear long “water sleeves” that are used almost as dance partners.

“For one, I have never seen anything like this,” said Jessica Rayfield, a massage therapist and a performer herself.

“Just watching the beautiful movement, and the joy that was in their faces and their bodies as they dance, it was phenomenal. And you don’t see that a lot in Western ballet.”

“You could see the story unfolding in your mind, even with the music. It was absolutely amazing and breathtaking,” she said.

The performance includes short dances that serve as a window into China’s 5,000-year history, from the creation of the Celestial Empire, as China was once called, all the way to modern times.

Christine Fenolietto, a graphic designer, enjoyed the story-telling dance because they got the points across without any spoken dialogue. She mentioned that the dances about modern times in China—which depict the repression of traditional culture and of faith—were particularly interesting.

Since the communist takeover, the party earmarked the Chinese traditional culture for destruction. Thus Shen Yun’s mission is literally one of restoring an endangered culture.

Similarly, Ms. Harrelson felt tremendous the joy the performers had sharing their culture with the audience. They are “telling a story that longs, needs to be told,” she said.

The very act of preserving and sharing this culture with the world exudes hope for Ms. Harrelson: “There is always hope and they are proving that with every performance. So, it should give the hope to everyone that if you have a voice, use it, use it, and never give up hope.”