Shen Yun Makes You ‘Give Pause to Give Thanks’ 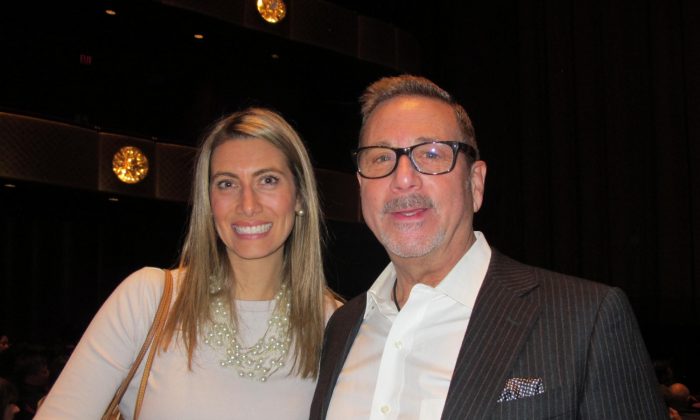 NEW YORK—Bruce Lifrieri and Alexis Minasian watched Shen Yun Performing Arts on Jan. 16 at the Lincoln Center in New York. She is a banker and he is the retired long time trainer of the New York Rangers hockey team.

“It’s so beautiful,” said Alexis Minasian. “All of the choreographed dances, the bright colors, and the costumes, very talented.”

Lifrieri said Shen Yun moved him and that it was beautiful, and also that he saw Shen Yun perform once before. This time he brought his friend Minasian with him.

Minasian especially enjoyed “traveling through the history of China,” and she said that the spirituality inherent in traditional Chinese culture was evident in Shen Yun’s performance.

“All the way to the moon,” she said, referencing one of the dances named “Visiting Chang’e at the Moon Palace” which depicted the mystical moon goddess of Chinese lore, Chang’e.

But this performance which openly depicts the traditional culture of China and Chinese spirituality, as well as China throughout time and in modern day, is actually not something one could see in China now.

Traditional Chinese culture was overturned in violent campaigns like the Cultural Revolution once the communist party seized power in China in 1949.

Shen Yun formed in 2006 in New York, with a mission to revive the almost-lost culture that has been suppressed for almost 70 years. Shen Yun works to preserve that history and to uplift audiences around the world.

Lifrieri understood that reviving the traditional Chinese culture that has been oppressed in China has a price.

“I’m a little concerned, are they… would they [Shen Yun] be in trouble when they go back [to China]?” he asked.

Indeed, Shen Yun will most likely not be able to safely enter China while the Chinese Communist Party’s regime is in control there.

Though the culture is suppressed today, China was once known as the Celestial Empire, and the culture had a deep reverence for wisdom and divinity.

Minasian said that she felt a connection to the divine during one of the solo performances in particular.

“The words are very meaningful,” she said, adding that they made her want to “give pause to give thanks in our own life.”

The two also appreciated Shen Yun’s patented backdrop, invented for Shen Yun. It brings distant dynasties and celestial scenes to the theater, while dancers move in and out of those worlds unfolding before the wide eyes of their audiences.

“So beautiful! So vibrant, the colours!” said Minasian. “Very colorful.”

With reporting by Mary Mann and Carrie Gilkison.