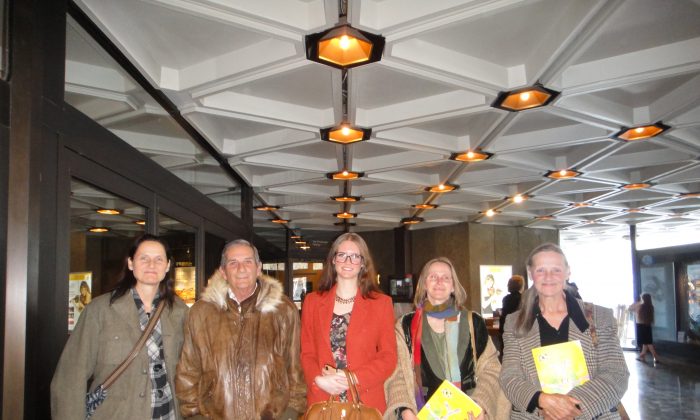 ‘I got it very deeply,’ Audience Member Says of Shen Yun

OTTAWA, Canada—Shen Yun Performing Arts performed at the National Arts Centre in the nation’s capital on May 8, bringing audiences the glories of 5,000 years of Chinese civilization and the deeply spiritual values that nourished it.

Traditional Chinese culture was steeped in the values of truthfulness, compassion, and forbearance, values that still flourish today in the hearts of Falun Dafa practitioners in China and around the world.

Shen Yun performers draw their inspiration from this meditation discipline and self-improvement practice. As such, they strive to create art that celebrates the divine and nurtures goodness. Audiences can see they bring genuine joy to their work.

Audience member Victoria Hoffman felt a profound sense of gratitude after the performance.

“I’m just grateful that my friend brought me here today, and to see the emotion in all of the dancers. I got it very deeply,” she said.

Ms. Hoffman, a bookkeeper, also felt that the performance passed on a higher knowledge. The performance left her feeling uplifted by the end.

“It’s a strong energy that comes from the show,” she said. “Just the colours alone are healing.”

Therapist Nicolas Greco also felt there was something special about the performance, which wasn’t obvious from the advertisements alone.

“We have been deeply impressed,” he said. “It’s fantastic.”

“It was very deep. It touched me deeply because I can relate to it,” said Eva Greco, a student.

Elsa Rochat, a high school teacher, said she tries to nurture virtue in her own life and follow a spiritual path. She noticed the strong positivity in the performance.

“For me, there is a lot of hope … and that’s truly the only way to save the world,” she said.

‘Very Much At Peace’

Also at the show was retired math teacher Len Siwik. “I felt very relaxed and very much at peace. It was very good,” he said.

For Mr. Siwik, listening to the lyrics sung by Shen Yun’s vocal soloists that talk of faith and redemption touched a chord. One song, “Life is Fleeting,” says, “Don’t let status, wealth, or emotions lure you away from your path back to Heaven.”

“That helped me a lot,” he said, referring to the lyrics of all the songs.

“I like the spiritual aspect of [the show] very much,” he said. “To me that gives a lot of hope for chinese people. I have hope anyway, and I can see if in fact it’s affecting chinese people that way, then I do have hope for them too.”

In conclusion, Mr. Siwik said he enjoyed the whole performance.

“The choreography is just wonderful, the costumes are just fantastic, the whole show was just superb.”