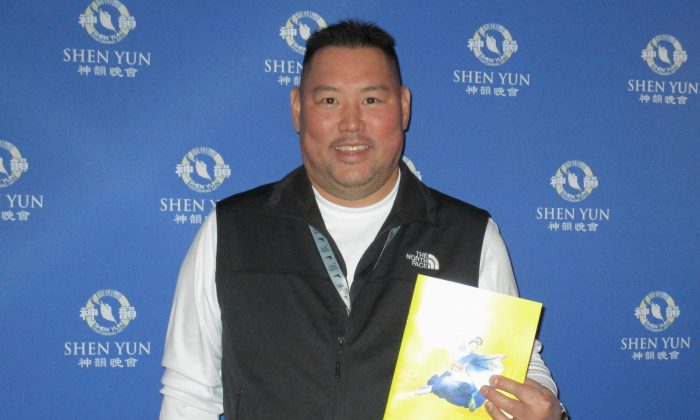 LAS VEGAS—Patrick Kung literally watched parts of Shen Yun Performing Arts leaning forward on the edge of his seat. He attended the evening performance Jan. 23 at Smith Center for the Performing Arts.

He could feel the immense dedication of Shen Yun’s performers.

“One of the things I’m very proud of being Asian is [that] I’m somewhat of a perfectionist myself,” he said. “One thing I’ve noticed watching it was the consistency and how precise everything was. It was just spot on.”

A Shen Yun performance includes the world’s foremost classically trained dancers, a unique orchestra that seamlessly blends traditional Eastern and Western instruments, and an innovative digital, animated backdrop that takes audiences on a journey of 5,000 years of Chinese civilization.

This is what audiences see on the surface. “But digging deeper,” Shen Yun’s website states, “one discovers a sea of traditional Chinese culture. Mortals and divine beings merge on stage as one. Principles such as benevolence and justice, propriety and wisdom, respect for the heavens, and divine retribution, all come to life, washing over the audience.”

Mr. Kung was moved by the depth of Shen Yun.

“It was very visually inspiring, but there was more to it than just the visuals,” he said. “There’s a message that I hope most people get out of it. And the message, I think, is [that] there is good and evil in the world, [along] with evil, there’s good, and good will always prevail as long as it perseveres. I think the message was very strong tonight.

“They touched upon the red regime and the red [guards] very superficially, but the meaning behind it is very deep.”

Mr. Kung was referring to a few vignettes in which the Chinese communist party attempts to suppress people of faith, a situation going on in the China today.

After witnessing these deeper themes in the performance, Mr. Kung felt inspired.

“It’s so admirable and it makes you inspired to do things yourself,” he said. “Nothing is impossible, especially [with] the human spirit.” Anything is possible if we put our minds to it, he added.

Although Shen Yun is becoming a household name in the United States with many performances being sold out for the past few years, the company cannot perform in China today, where traditional culture has been nearly destroyed.

Mr. Kung said, “I’ve seen performances in China as well, and they’re very bland because they don’t want to instigate anything. We’re fortunate that in America we have the ability to do this.”

When he was younger, Mr. Kung moved to China for a short but highly critical time—immediately after the 1989 Tiananmen Square Massacre. He said that Beijing was under martial law, and he saw policemen on each corner carrying weapons.

“Unfortunately, China doesn’t allow freedom of expression like we do here,” he said.

Mr. Kung could feel from the performance that China’s traditional culture is deeply imbued with spirituality. He said that people showing respect for the divine give him a feeling of reverence.

He referred to one story-based dance called Monks and the Red Guards, in which Buddhist monks successfully ward off violent youth from the Chinese communist party during the Cultural Revolution (1966-1976).

“You don’t have to beget violence with violence,” he said, “but you do have to stand up for something. And I think the message here was there’s evil everywhere, and to combat evil, sometimes you have to step up and stand up for what’s right.”