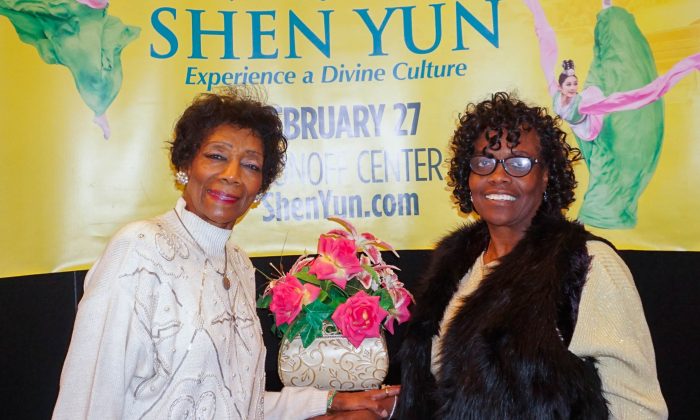 CINCINNATI—Shen Yun Performing Arts’s work is “totally, insanely beautiful,” said K. Francis Barksdale. Known as Cincinnati’s “Gospel Jewel,” Dr. Barksdale has been to see Shen Yun perform every year, and it “just gets better and better, and gooder and gooder. … They say there is no such word, but yes there is when it comes to this show!  Every year it gets more spectacular than the year before,” she said with jubilant enthusiasm.

“I couldn’t but cry with glee and happiness knowing that we are able to see such a show as this,” she said.

Dr. Barksdale  received an honorary doctorate from Temple Bible College and Seminary, and attended the Aronoff Center for the Arts on Feb. 27 with her good friend Eddie Strauss, who also has a doctoral degree.

As much as Dr. Barksdale cried for happiness at the beauty of the performance, she also shed tears for another reason.

“I couldn’t help but cry when I heard them say that in China they are not allowed to show this performance…. I thank God we have this show being brought here every year,” she said.

And the fact that the classical Chinese dance and music company is banned from China does not sadden Dr. Barksdale merely because the display of China’s beautiful heritage cannot be seen in the country of its origin. She cried for a deeper reason.

“I’ve been crying because we can worship God here, and there are so many people that do not know God,” she said.

As an atheistic regime, the Communist Chinese Party has forbidden Shen Yun from bringing the divinely inspired culture back to China, just as the Party has repressed people of faith there.

Singing since she was five, Dr. Barksdale, early in her career, had pleaded with God to help her—she would never sing secular music again if only He would help her regain her voice. She had survived a devastating fire and smoke had damaged her throat. She’s kept that promise over her long career.

The gospel singer thought Shen Yun’s soprano used her voice to “excel and expand,” and felt the lyrics fantastically beautiful because they reminded her that we are all looking forward to heaven.

Dr. Barksdale wished that “everybody in America could see this fantastically beautiful show,” and said that as long as Shen Yun keeps bringing this performance to America, as long as they are here, she’s going to be here, too.

This time around Dr. Barksdale brought Dr. Strauss along, who was seeing the performance for the first time.  Dr. Strauss felt it was more than what she thought it would be:  “Everything they did was just meticulous.  Everything was perfect: the dance, the flow, the colors, the music, the sound, the production. Everything was excellent—superb!”

“I am just so excited I came; I am going to tell all my friends when I get home,” said Dr. Strauss, whose voice rivaled Dr. Barksdale’s in its excitement.

“The spiritual connection they had is a universal thing,” she said. Just seeing the opening dance in which the Creator called forth many deities from heaven to come to Earth made her feel more spiritual and embraced by love.

“I felt that the spirit of God was all over me. It was a spiritual connection, divine. God is love and I just feel so wonderful—the whole spirit of God all over you. It was more than just dancing, it was a message there. It was about the divine, universal God that created everything,” she said.

She felt the performance made her feel like a godlier person.

Explaining a bit more, Dr. Strauss said, “It makes you feel so brand new. It’s like it renews you…. Something deep down in your soul can connect with the spirit.”

“It’s just wonderful and makes me feel how blessed I am and how God created the production and how God made me feel inside,” she said.

“How great Thy art,” she was moved to say.

“How great Thy art,” Dr. Barkley, echoed in reply.