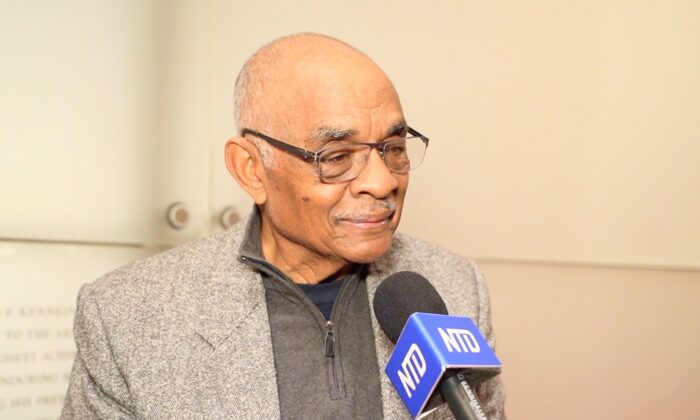 WASHINGTON, D.C.—Shen Yun Performing Arts, the world’s foremost traditional Chinese dance and music company, once again delighted an audience hailing from all walks of life and all ages at the Kennedy Center Opera House in Washington on Feb. 15, many of whom were not watching the performance for their first time, or their last.

The Honorable B.J. Penn was one audience member who has seen Shen Yun many times.

After beginning his career as a naval aviator, Penn would ultimately be promoted to Assistant Secretary of the Navy where his field of responsibilities was extensive. He is now the CEO of Genesis IV, an executive consulting firm headquartered in Northern Virginia.

Why does Penn keep coming back to see Shen Yun?

“The beauty, the message, the skill, and the talent of the performers—it’s just really remarkable,” he said.

Shen Yun dazzles its audience with a panorama of classical Chinese dances, each of which narrates a story or gives a colorful display of China’s traditional culture.  The dancers also portray the Chinese communist regime’s relentless persecution of the ancient spiritual practice of Falun Dafa.

Penn said that the story of Falun Dafa carried an important message.

The essence of that message is that the persecution of Falun Dafa adherents involves “things that shouldn’t be happening to mankind today.”

“I think the president did the right thing with the Olympics [with his diplomatic boycott],” he said.

“It’s very obvious that the Chinese Communist Party is not the party of choice,” Penn said.

It was, in fact, the communist regime that brought China’s traditional culture to the brink of extinction.

Meanwhile, outside of China, Shen Yun is able to lift the public’s spirit, Penn said.

“My goodness, I mean, [just listen to] the crowd. And no one has left, which for Washington D.C. is very unusual. People are enjoying it immensely,” he said.

Penn, himself, could feel an energy emanating from the stage. It came from the hearts of the performers, he said.

“They feel it. And I think the audience feels it as well.”

“I’m elevated. I feel good. All is not right with the world, but with the performance, it is. The spirit is high. And you want good things to happen for everyone,” he said.

Penn was surprised to learn that Shen Yun is based just out of New York City and wished the performers well for the future.