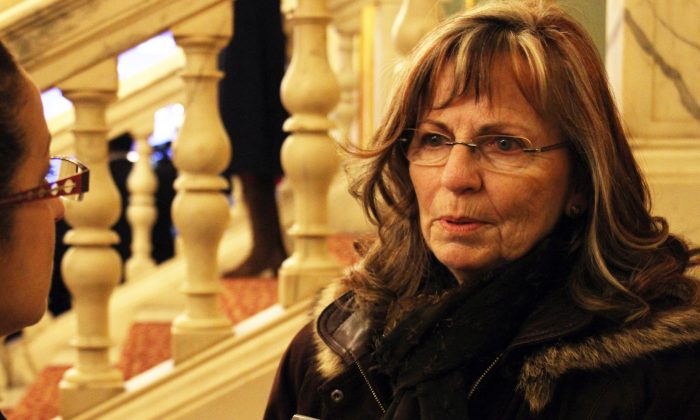 Ms. Conchita Feliu, who brought a group of 40 people, said Shen Yun had created a paradise away from our everyday lives. (Epoch Times)

BARCELONA, Spain—Ms. Conchita Feliu, a travel agent, saw Shen Yun perform last year and loved it so much she brought a party of 40 on Friday to share it with this time around.

She, like many in Barcelona last week, was swept up in a world of classical Chinese dance and music through Shen Yun Performing Arts, which played to two full house performances March 17–18 at the Gran Teatre del Liceu.

“We were looking forward to it, with a lot of expectations, because we watched it last year, and we were stunned by it. This year too, because there are a lot of new things. It’s not every year the same, it’s different. Different dances, legends, the costumes are gorgeous, especially the Manchurian ones and the ones with the long sleeves. There was a tenor, a bass, a soprano, an array of things, and the orchestra that doesn’t deserve 10 points, but 12!” she said.

Ms. Feliu said she felt like she was on a cloud. The whole production was something just really special, and she felt her group enjoyed it all too.

“Because it makes you feel like you’re in a paradise. We are so used to our activities, that it makes you dream,” she said. “You dream with this show, at least for a couple of hours, and then we come back to reality.”

“It was like watching magic,” said Mr. Abel Hernandez, journalist and creator of the Mister Bag fashion blog, after seeing a dance performance with the theme of reviving a culture of 5,000 years.

Really, fully, it had touched his soul, Mr. Hernandez said.

“You enter in another world. At that point you’re not here, you are in heaven, and you are in heaven with Chinese traditions. And you evade all evil to just enjoy and feel the soul,” he said.

Mr. Hernandez described a world where heavenly maidens and fairies wore costumes made to measure, perfectly tailored and molded in every way. It was a world of whimsy where characters like the Monkey King traveled up to the sky and under the sea. The dancers moved with a gentle grace that made it seem like they could fly. The bel canto soloists conveyed such a message that, even through Chinese lyrics, when it came to an end, he said, “please sing another one!”

“I feel eager to go back; I want to see it again. Right now I have this feeling … I am right now as if I had been introduced in China … I am with inner peace, really,” he said.

The China Shen Yun wishes to share with the world is one that reflects the authentic traditional Chinese culture, according to the New York-based company’s website. The 5,000 year-old-culture is said to be divinely inspired, and it is the company’s mission to share it with the world through the arts.

Ms. Girogina Rigola, former dancer at the Teatre del Liceu, and director of an annual international dance competition held in Barcelona, said “everything is perfect.”

“The sensitivity of the performers … I love it,” she said on the opening night.

She really got the sense that this culture was divinely inspired, that it was something imparted to the ancient Chinese from the heavens.

“Everything, the choreography, the set design, the flowing costumes, makes you feel that they really are in a higher place, that they are not from this Earth,” Ms. Rigola said. “And I know how difficult it is to achieve that; that’s why I love to watch them.”

The purpose of the arts is to let you have a nice time, she said, and Shen Yun did that just. In a world filled with conflict and revolution and so many blows, she said, it was even more essential. It was heartening that the artists of Shen Yun thought it was worthwhile to create something of peace, in order to make the audiences calm, Ms. Rigola said.

“It gives you peace and harmony, where you enjoy the music and the images. I think nowadays this is essential to everyone.”

She said she has a lot of respect for what Shen Yun artists are able to achieve because “they are showing that they are able to do many things.”

She added that she was particularly awestruck by the conclusion of the performance.

“It’s like a time tunnel that never ends, and that hope is not lost.”