Shen Yun, ‘Listening and watching allowed me to broaden my mind’ 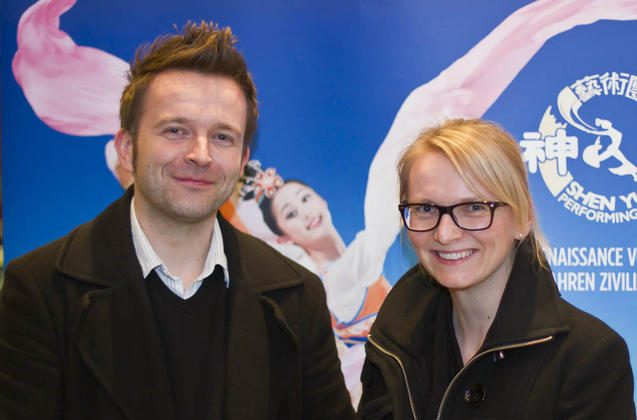 This theater, with its 1,800 seats is one of the largest theaters in Germany, opened its doors in 1999 and is located in a place where the Berlin Wall stood.

Ms. Slaby, studied music in Shanghai, China for two years and then continued her studies, concentrating on the violin, in Hannover, Germany.

Hearing the erhu, a two-stringed bowed musical instrument, made her remember her years in China.

She said, “Listening to the Chinese instruments was a memorable experience. I enjoyed it very much because I was exposed to the Erhu during my years in Shanghai.”

Mr. Dwulecki had come all the way from Hamburg to Berlin, a distance of 158 miles, to see the Shen Yun show and will return right after the show.

He said, “I enjoyed the show tremendously. But, mostly I enjoyed the orchestra that included the Chinese instruments.

According to the Shen Yun website, “The Shen Yun Orchestra combines the spirit, beauty, and distinctiveness of Chinese music with the precision, power, and grandeur of the Western symphony orchestra.”

Mr. Dwulecki said after having listened to the Erhu, “That was fantastic. I have never heard such a sound. It was so impressive.”

He added, “The sound of the Erhu reminded me of human song, which surprised me, especially because I heard something that was so similar to the human voice.”

Mrs. Slaby chimed in, “This performance brought to its audience such an open and authentic China, something I didn’t experience during my entire stay in China.”

Then, Mr. Dwulecki spoke of the scenes that depicted the persecution of the Chinese spiritual practice Falun Gong that has been banned since 1999 in China.

“The scenes about the persecution of Falun Gong by the evil were in direct contrast to the beauty of the other scenes. It appeared so realistic. Now, I’m able to visualize what is happening in China today, and the evilness of the persecution.”

Ms. Slaby added to what her friend said, “The scenes about the persecution were so realistic. I neither saw this in China nor have heard about it in this clear format outside of China. To include in a cultural show such a theme is remarkable and excellent.”

Changing the subject, Mr. Dwulecki addressed the folklore depicted on stage. “I was rather surprised the Chinese legends are similar to our legends. I don’t mean by that the content of the stories, but that it is more or less a myth.”

He continued, “I never thought that the legends are so connected to religion. The message I received was that culture is part of Buddhism. Now, I know that Buddhism had a great influence on that region, and that it is the authentic Buddhism.”

Ms. Slaby found the songs to be familiar, “I felt as if I had sung the song “Saving All Beings.” Although I hadn’t heard the songs before, they felt so familiar.”

“All-in-all, the evening was awesome, because the show included something for everyone. Listening and watching allowed me to broaden my mind, especially with the help of the pictures on the backdrop.”

Mr. Dwulecki’s last words were “I will search for information about Falun Gong. I want to learn more about it and want to understand the essence of that practice.”

Reporting by NTD, Epoch Times German and Heide B. Malhotra