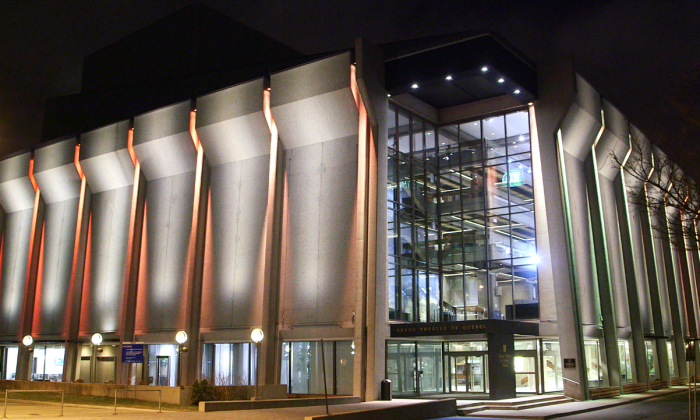 The Grand Théâtre de Québec in Quebec City, where Shen Yun performed two shows on May 3 and 4, 2016. (NTD Television)
Canada

QUEBEC CITY, Canada—CBC journalists Marie-Claire Giffard and Alain Saint-Ours were impressed by the artistry onstage when they attended the premier classical Chinese dance and music production presented by Shen Yun Performing Arts at the Grand Théâtre de Québec on May 4.

New York-based Shen Yun has been touring the world since 2006 with the mission of restoring the traditional culture of China, believed by the ancients to have been transmitted by the divine to the people on the earth. It is a rich ancient heritage that has been almost destroyed in China over the past more than 60 years of communist rule through systematic campaigns like the Cultural Revolution (1966-76).

Seeing the richness exhibited onstage led Mr. Saint-Ours to reflect on the suppression of the culture, which is 5,000 years old.

“I think of the Chinese revolution. How can people who have as much imagination accept such limits? [Shen Yun performers] have many abilities, both physical and mental, because to do what they do physically it’s got to be going on in their head too. It must be integrated motion in mind. It is the spirit that dominates the body, it’s not the body that dominates the mind,” he said.

Shen Yun features performances of classical Chinese dance, one of the most comprehensive dance systems in the world.

“This is rather extraordinary, it’s a very beautiful show,” said Ms. Giffard. “This is where you see that human expression that has no language.”

Ancient Chinese culture was very rich in spirituality, nourished by the teachings of Taoism, Buddhism, and Confucianism. Much of this spirituality—what Shen Yun calls the essence of the culture—has been repressed by the atheistic communist regime. However, it is integral to traditional Chinese culture and Shen Yun is reviving it, and while the show tours the world each year, it is not allowed in China.

“I understand that the Chinese outside China have expressed that need to find their roots,” said Ms. Giffard. “Too bad it cannot be expressed within China. That is what I find deplorable.”

Mr. Saint-Ours noted that these questions of spirituality are ever-present today in all cultures and traditions.

“Who’s God? Every culture has its representation. It is certain that there is a force greater than us. All the performances we see tonight reflect this—something greater than ourselves, only fused by the synchronicity between individuals,” he said.

“There’s no individual who can achieve this alone,” he added. “It’s like a chain in the background. A chain is never stronger than its weakest link. All the links are strong here.”