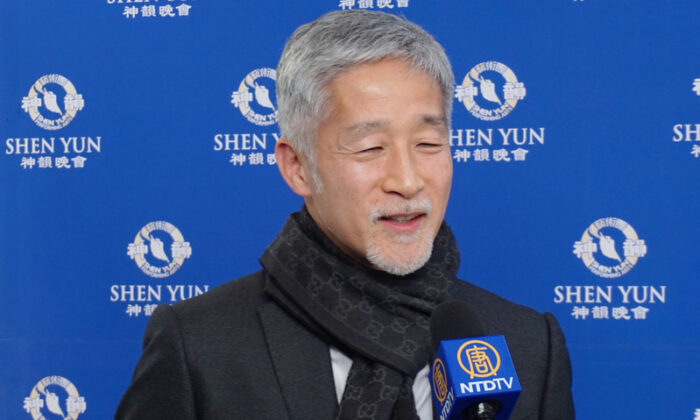 HIROSHIMA, Japan—As a busy medical doctor, Inoue Kenn, superintendent of Inoue Neurology Hospital, took advantage of his Sunday afternoon on Dec. 29 to attend Shen Yun Performing Arts New York Company’s first show at Hiroshima Bunka Gakuen HBG Hall in Japan’s Hiroshima. It turned out that he was truly touched by the performance, and said that he found the hope that could light up human hearts.

“Very outstanding,” he said. “It’s rare to see such a perfect combination of traditional Chinese music and Western music.”

Inoue was especially moved by elegant and soothing music played by the two-stringed Chinese musical instrument erhu in the Shen Yun performance.

“The solo performance of Chinese traditional instrument erhu is really marvelous,” he said.

Inoue was also in awe at Shen Yun’s performance of classical Chinese dance, which requires difficult techniques such as jumping, flips, bearing, and form, etc.

“It’s by no means something that ordinary people can make. As if [Shen Yun dancers] were helped by divine beings,” he said.

“The performers must have undergone rigorous training and practice,” he said. “I didn’t notice any mistakes or flaws. It’s truly amazing and touching.”

Shen Yun’s high-tech animated digital backdrops can seamlessly link performers with plots, and let the audience have a miraculous feeling of transcending time and space as if they were inside the scenes in person.

“The synchronization of dancers on the stage and the figures on the backdrops was seamless. It’s indeed amazing,” Inoue said.

“Apart from being touching, I also found that the program is also kind of humorous,” he added. “It’s really great.”

As Shen Yun’s mission is reviving the 5,000 years of the divinely inspired Chinese culture, Shen Yun leads the audience to re-recognize the human natures of sincerity and compassion through performing historical legends and the stories of ancient and contemporary figures with the virtues of loyalty, filial piety, integrity, and righteousness. The superintendent was deeply moved by the positive energy of the performance.

“Faced with the atheism and indifference existing in the world nowadays, Shen Yun made me feel warm in my heart and the hope that lights up human heart,” he explained.

“[Shen Yun’s] performance is very interesting. The entire program, from the beginning to the end, is gorgeous,” he added. “It really made me have a most wonderful New Year.”