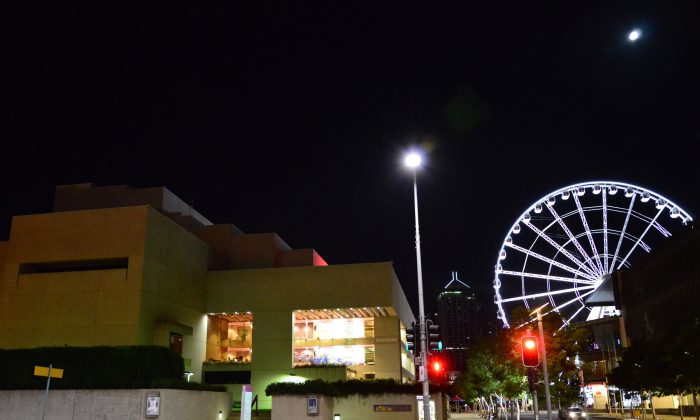 But with the wind in their sails, the world-renowned classical Chinese dance, music, and song company was off to Toowoomba to prepare for a one-night-performance, March 2, at the Empire Theatre, followed closely by March 4-5 on the Gold Coast.

Toowoomba is the sixth largest inland city in the Queensland state.

Based in New York, Shen Yun has for over a decade played to thousands of viewers across the globe bringing to life China’s 5,000-year divinely inspired culture, almost lost to China’s communist rule.

Portraying heroic legends, folkloric tales, and modern day stories through the performing arts, Shen Yun this year features some 11 performances of classical Chinese dance, along with performances of ethnic or folk dance, bel canto vocal solos, and an erhu solo.

Artist David Saunders and his wife Mary, who were at the Lyric Theatre for the last show, waited three years to see Shen Yun, says now he’s “hooked” and awaits its return.

Mr. Saunders said he could feel the spiritual essence of the whole stage production and bordered on crying, enamoured by the femininity of the women who showed great strength in their performance.

“I was moved by the charm, delicacy, soft colours—beautiful,” he said.

He was also intrigued by the animated digital backdrops and how Shen Yun “brought the images out of the heavens all the time, and down on to the earth to show the people on the earth how to behave, and how to live. It was beautiful.”

As an artist, Mr. Saunders said the backdrop scenes were “all brilliant.”

“I think the photograph [was] very realistic, absolutely in your face. The idea of the spirits of people coming out of the heavens and talking with the people on the ground, I thought that was wonderful.”

Shen Yun was extra special for Mr. Saunders because he could draw similarities between his own spiritual beliefs and that of Shen Yun’s portrayal of Heaven and Earth.

“There’s not a great deal of people talking about it like that. And I can see the reason [Shen Yun] wants to expand their vision and take it into the world. … It’s like a mission, a discipleship.”

Also watching Shen Yun Performing Arts on Feb.28 was retired police officer Graham and his wife Lorraine, also retired, who used to be a sub-editor for the Sunday Mail newspaper.

Graham said that overall the performance was “just beautiful and so clever. I just love the fact of all that scenery at the back and how they meld it with … on stage. Absolutely beautiful, riveting.”

Lorraine felt the same. “The costumes are unbelievable. The dancing, the timing and everything were absolutely spectacular. It was really good. I enjoyed it”.

They both said the music presented by the Shen Yun Orchestra’s combination of Eastern and Western instrumental composition was brilliant.

“And so were the singers. The sopranos were brilliant, absolutely brilliant,” Graham said.

Lorraine chimed in, saying, “How wonderful it is that someone so young has got such a depth of volume,” she said.

Lorraine had never heard the haunting tones of the ancient Chinese two-stringed violin, the erhu, before.

“That was unreal. I have never seen that before. When they said that there were only two strings and the amount of sound that came out of that was beautiful. She did so well. I wanted to hear more of that.”

‘Beautiful dancers leap through the air’

Also seeing Shen Yun for the first time was Teresa Munchow and her daughter Janine, aged 9 and a half.

“It was stunning! I thought it was very fluid and elegant and very well synchronised, well practiced, and just a sight to behold,” Ms. Munchow said.

Ms. Munchow brought her daughter to experience classical Chinese dance and open her up to Chinese culture.

“I think she would learn some of the culture story lines and some of the Chinese traditions that are so unique. And she’d learn the discipline of the dancing and how much effort the dancers put in to doing such an awesome show for us to watch. So it was a very good opportunity for her to see,” Ms. Munchow said.

Classical Chinese dance is at the heart of what Shen Yun does.

Shen Yun website says: “Classical Chinese dance has its own set of training methods in basic skills and has strict training in both physical expression and specific postures. It also involves learning combinations of leaps, turns, flips, spins, and other aerial and tumbling techniques. It is a vast and independent system of dance.”

Young Jenine Munchow was excited watching the Shen Yun dancers portray different characters in the story-dances, such as “The Steadfast Heart” and “Fairies of the Sea,” to name a couple.

She will tell her friends that “there were beautiful dancers, and they were leaping through the air. I would tell them that it would be pretty hard to dance like that and they make it look so easy!”