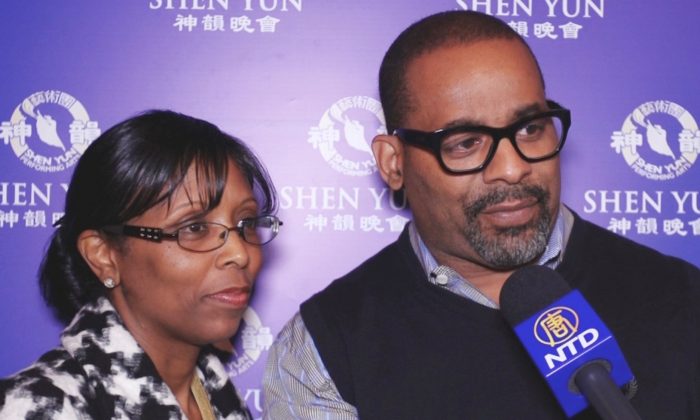 NEWARK, N.J.—Dr. Titus McMillan, CEO of Healing Inside Me Clinical Therapy, has made it a life mission to inspire well being in others. On May 1, he felt wholly inspired and rejuvenated himself. In fact, Shen Yun Performing Arts had taken his breath away.

“It was so inviting it was almost overwhelming. It’s very emotional,” said Dr. McMillan, who attended the performance at NJPAC with fellow healer Rekishia Beans.

It was his first encounter with a divine culture, and he was amazed at the level of spirituality, and its effect, the traditional Chinese culture had. It was something to be witnessed, and he wanted all to see it.

“If you take the time to come and visit Shen Yun, I’m sure you’ll leave divinely inspired,” he said.

“This is our first time and it’s truly an amazing, amazing experience with the culture, the spiritual aspect, and how the history of ancient China has actually been revived and brought back to the forefront—which so many of us need to know,” said Ms. Beans after the performance. “I’ve been enlightened; we’ve been enlightened. It’s truly been a wonderful experience.”

Ms. Beans was touched by the painstaking effort people have made to preserve this culture, and felt that she was seeing the story of how “the ancient culture was saved” on stage.

This is the reason for Shen Yun’s being, according to its mission. The non-profit company’s website explains that for thousands of years China was known as the Middle Kingdom, where heaven and earth came together. People revered the divine, and society was built upon principles that came from the teachings of Buddhism, Taoism, and Confucianism.

In mere decades, this changed. When communism took power, it destroyed temples and palaces and persecuted people for their faiths, systematically trying to erase any remnants of traditional beliefs through campaigns like the Cultural Revolution.

Shen Yun’s artists, based in New York, were people who came together in an effort to preserve things like classical Chinese dance, like ethnic and folk dances of minority groups in China, like the Tang Dynasty dress modeled after heavenly garments, or like the story of Emperor Kangxi in this year’s program, and share it with the world.

Dr. McMillan, who is also a photographer, said he was taking pictures every moment in his mind.

“To see the collaboration, the artistic value in even just the costumes, I’m thinking, who in the world put these outfits together? Because they are fabulous. I mean, absolutely fabulous,” he said.

“You’ve got to come back and see it again just to take it all in. And what I just learned is that every year, there’s something different. So now I’m already planning to come next year, to bring my father, to bring my mother, to bring my wife, to bring my daughters. It’s going to be incredible,” he said. “I love it.”

Ms. Beans said the feeling was amazing and enlightening.

“And you get that feeling of spiritual connection,” she said. “Incredible show.”

Dr. McMillan said he felt a spiritual connection as well. The theme of the performance, for him was love.

“How could you [not] see the love that just poured out? This is all about love, and it’s love universally. It’s not love to divide us. We may look different, but you’ve got to understand, it’s a love that’s universal,” Dr. McMillain said.

He was awed by the impact that Shen Yun could have, traveling around the world and showing this universal love to audiences on a daily basis.

Ms. Beans said that all throughout the performance it was true love. “It truly does encapsulate the motion of love, totally.”

Dr. McMillan said he could see this in the stories, like in one set in modern day China where a couple is separated and persecuted for their faith. They had love, showed support, and persevered to a hopeful ending.

He felt Shen Yun showed themes that bring about real relationships, and showed fellowship in society, the relationship between man and God, between brothers and sisters, between couples, and how “we need to understand how we [can] come together to support that same cause.”