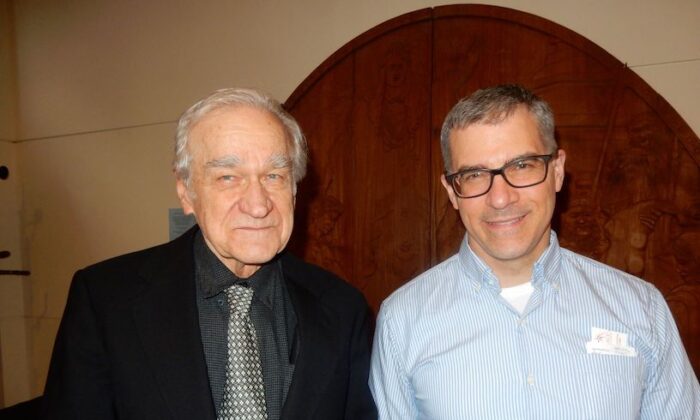 Peter Kucer, priest and president-rector of Holy Apostles College & Seminary, attended a performance of Shen Yun Performing Arts at the Palace Theatre on Dec. 26, 2019 with his father, John Kucer, a former professional violinist who worked at the Juilliard School and the Manhattan School of Music. (Wei Yong/The Epoch Times)

STAMFORD, Conn.—New York-based Shen Yun Performing Arts has impressed the world’s most discerning theatergoers during its years of international touring since its inception in 2006. Today’s performance at Stamford, Connecticut’s Palace Theatre was no exception.

Peter Kucer, priest and president-rector of Holy Apostles College & Seminary, attended Shen Yun with his father, John Kucer, a former professional violinist who worked at the Juilliard School and the Manhattan School of Music.

“It was very beautiful. The technique was flawless,” Peter said on Dec. 26, 2019. Shen Yun performers’ “love of art, devotion, and especially the technique” stood out to him.

“But their ability to be joyful at all times while dancing, that’s pretty amazing,” Peter said, describing the biggest impression the performance had on him. “The joy in the dance—it’s very uplifting and I feel spiritually nourished.”

“Classical Chinese dance is at the heart of what Shen Yun does,” its website states. “[It] has its own set of training methods in basic skills and has strict training in both physical expression and specific postures. It also involves learning combinations of leaps, turns, flips, spins, and other aerial and tumbling techniques. It is a vast and independent system of dance.”

John Kucer, a former professional violinist, praised Shen Yun’s unique orchestra, the only one in the world to permanently combine Western orchestration with authentic Chinese melodies and instruments.

“It’s very good. The orchestration is very good,” John said. “It’s a combination of Asian and Western type of orchestration. It’s not one way or another, so it takes in the East and West, so to speak.”

“It’s incredible what the human being can do. I wish I could flip through the air the way they do. It’s going against gravity, so to speak. As Peter said, the technique is impeccable, truly impeccable,” John said.

John and Peter agreed that Shen Yun’s spiritual narratives left a deep impression on them.

“You’re open to a realm that goes beyond the material world, another dimension,” Peter said about Shen Yun’s numerous dance pieces and songs, with divine themes such as in “The Firmament Renewed,” which depicts the Creator calling upon divine beings to follow Him to earth to “perform the script of history.”

For Fred Runne, a former project manager, today’s Shen Yun performance was an experience 10 years in the making.

“I’ve been wanting to see this show for many years now, I’d say maybe 10 years, and I just never had the chance,” Runne said. He was determined to see Shen Yun this year, so he attended by himself, despite the fact that he didn’t have anyone to accompany him.

It was a choice he didn’t regret.

“It was a phenomenal performance. It was beyond my expectations. The quality of the dancers was fabulous. The music was wonderful. The costumes were fantastic. So uplifting, colorful,” Runne said.

The final dance, “Renewal of Heaven and Earth,” especially stood out to Runne, who was moved by its depiction of the Creator and heavenly realms.

“That last act, with the old and the new, was fabulous because that’s life—we’re living in the new but we still respect the old and appreciate what came before. I found it very uplifting. I could feel the energy of the show. It was fabulous.”

“I think part of what proves that was uplifting is that I can talk so much about it, and I feel uplifted just talking about it. It was a wonderful show.”

Upon hearing that some audience members’ lives are changed for the better after seeing Shen Yun, Runne agreed that that may very well be the case for him because of the performance’s ancient Asian philosophy and the quality of the artists.

With reporting by Wei Yong, Sally Sun, and Brett Featherstone.