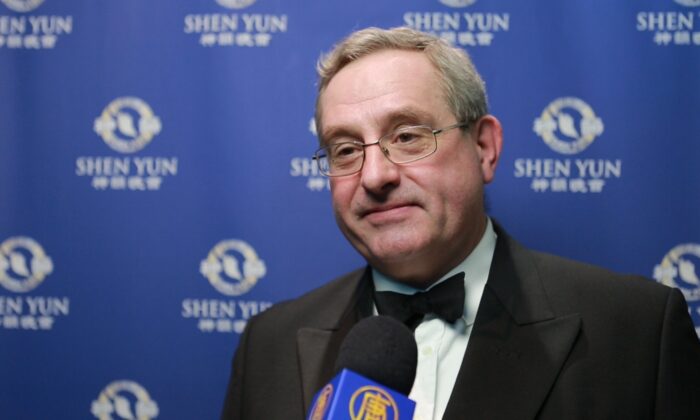 “It was just something very special,” said Adrian Aplin, the managing director of Bickenhall Developments.

“It was amazing. It was just such a fantastic mixture of music and dance and spectacle. Incredible orchestra. Great dancers,” he said.

He said he was impressed by Shen Yun’s unique orchestra, which combines a traditional western symphony with traditional Chinese instruments like the erhu and pipa for a sound that is both familiar and unique.

“It’s very exciting. The music sort of gets into your body and you really get enthused by it.”

New York-based Shen Yun is the world’s premier classical Chinese dance company. The dances draw inspiration from China’s 5,000 years of divinely inspired culture and the dancers work to embody the highest ideals of that culture.

“They were absolutely incredible. So athletic and so flexible. Some of the moves that they’ve pulled off were unbelievable,” said Aplin.

Classical Chinese dance includes highly technical jumping and tumbling techniques, moves that were later adopted by gymnastics and are familiar to many people as acrobatics.

The company was founded on a mission to revive China’s traditional culture, a mission that Aplin admired.

“I think it’s really good, it’s spreading the Chinese culture and the Chinese tradition, and there’s some really good stories to be told about the Chinese values and their relationship to the world we live in today,” he said.

“China is a very ancient culture going back many thousands of years,” he said.

The teachings embedded in that culture had deep value for other countries, he added.

“We’ve lost our way a little but and I think going back to some of these traditional values would be a really good thing.”

“I think the performance on stage depicted divinity, the culture of divinity of the Chinese people in a nice and colorful way,” he said.

That culture has been all but extinguished in China proper following the rise of the communist party and decades of different political campaigns, most notably the Cultural Revolution from 1966 to 1976. Millions died and many of those targeted by the regime were people who refused to renounce traditional beliefs. China was once home to three major traditions, Buddhism, Daoism, and Confucianism, which guided the people towards high moral values and spiritual connection.

Another couple also suggested that culture had real value for those in the West.

Artist Antoinette Petrides said Shen Yun is an inspiration and the traditional values it is reviving are important, especially for the next generation of Chinese people.

When asked to describe Shen Yun, she said the performance was “absolutely beautiful, stunning.”

“It’s fantastic, fantastic,” said Mrs. Evans. “I love dancing and I dragged him along.”

“It looked beautiful, really, really beautiful,” said her husband. “I thought it was fantastic, uplifting.”

Many who attended the show described a similar feeling, of being energized but made calm, and feeling uplifted.

Blanka Perse, a nutritionist who came with her husband said Shen Yun was “very refreshing,” and “very different.”

“They are marvelous, they really dance well. It looked so easy, and one knows that is not easy,” she said.

Carer Rachael Hill came with friend and paleontologist Chris Tait. During intermission, the pair praised the technical quality of the performance.

“I think the way they choreograph it so that everyone is moving at the same time, is visually spectacular,” said Tait during intermission.

“Stunning,” said Hill. “The use of the special effects how they go from the dancers back into the background then back out again is amazing. I didn’t know that was going to be in there. Really really appreciate the chance to see it.”

That background is Shen Yun’s animated backdrop, which presents vistas from heavenly realms to diverse regions in China, which often interact with the dancers on the stage.

“It’s beautiful. I love all the colors, and the way they had the picture in the background that mirrored the colors of the costumes and the beautiful Chinese countryside, and the scenes with the mountains, and all that, beautiful.”

She said she had not expected a full orchestra, let alone Shen Yun’s unique combination of instruments.

“The music is amazing,” she said before going on to praise Shen Yun’s wider impact.

“I was really overwhelmed. I cried. It’s beautiful. It’s beautiful,” said Tucker, who was classically trained in ballet and still passionate about dance.

“It’s so coordinated. And the costumes are so clever,” she said. “How they work with the body is so great.”

Georgina Terry, a psychotherapist in London came with her father Malcolm Terry, who does property investment also in London.

“It’s totally not what I expected,” said her father. “You can sit there and almost meditate whilst you’re watching it.”

“And their body postures are just mind-blowing,” added Mr. Terry.

“I think it’s an amazing success,” he said.

With reporting by Xiaomin, Mary Man, and NTD Television.