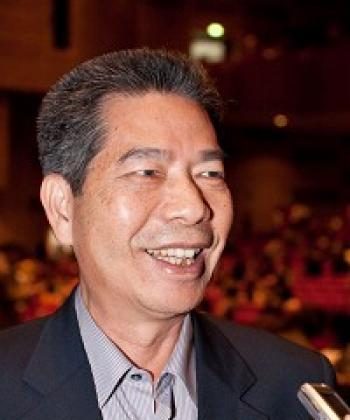 Aboriginal Legislator: ‘It is truly worthwhile for me to come here today’

By Billy Shyu and Xiue He
Print
KAOHSIUNG, Taiwan—Mr. Jian Dongming, incumbent legislator and former Pingtung County Assembly Member, attended the New York-based Shen Yun Performing Arts International Company’s fifth show in Kaohsiung with his wife on the evening of March 15. After seeing the show, he described his feelings about Shen Yun as “professional, miraculous, and valuable."

As he often took aboriginal people to perform overseas, Mr. Jian has a keen appreciation of dance. He said, "Both the dancers’ body movements and facial expressions were very beautiful." Seeing Shen Yun dancers’ solid fundamental dancing skills and the complicated and challenging movements performed on the stage, he commented, "They were very professional. This kind of performance is not easy to come by. I think it was a divinely inspired show, and divine power is something that we should not ignore.

"It has indeed broadened my horizons. Shen Yun has lived up to its reputation, as the performance was so truthful, so compassionate and so beautiful. The 5,000-year-old Chinese culture really should be preserved.

"Other performing arts shows are often rather superficial, profit-oriented, and are often poor in content. It is truly worthwhile for me to come here today."

Ms. Dai Jinhua, principal of the Beiye Elementary School in Pingtung County, echoed Mr. Jane’s sentiments by saying that more people should be encouraged to see Shen Yun, and that she also would like to share her feelings with aboriginal artists. She said, "Invite more people to appreciate the show, to be inspired, and to share the magnificence. This is the opportunity for you to do something meaningful.”

Read the article in Chinese