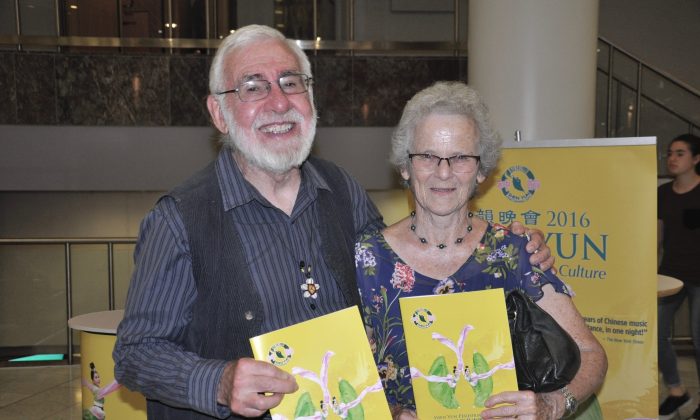 Mr. Doherty said he had never seen anything like Shen Yun but loved what he saw.

“It was energised, it flowed beautifully. Lots and lots of flowing dance,” he said.

Mr. Doherty is a counsellor, spiritual director and group facilitator who currently lectures at the Unitec Institute of Technology in Auckland.

He believes modern society needs to return to truth and goodness and compassion to heal the devastation around the world and so he feels Shen Yun is very relevant today, to help heal the world.

“I think it’s a uniquely powerful, spiritual message. I think it’s rich in truth,” he said. “And I’m really touched by a stage show that wants to base their whole script on truth and the spirituality of goodness, and that, you know, I think is pretty special.”

Shen Yun, based in New York, draws its inspiration from China’s 5,000 years of civilisation. Values such as compassion and loyalty, kindness and courage are at the heart of Chinese traditional culture. But under the last 60 years of communist rule, China’s traditional arts and culture have been desecrated, but through classical Chinese music and dance, China’s ancient history is being revived.

Mrs. Doherty said she was “really touched” by the Shen Yun artist’s quest to bring back China’s culture. “I’ve been quite moved by that.”

She said, “I particularly think the Chinese people in China, from what I’ve understood, have actually found that these sorts of spiritual exercises [Falun Gong] are very healing. I don’t know very much about it but I’m sure that there’s much that we can learn about this as well.”

Mr. Doherty added, “I think the spiritual depth and the flowing through really touched me, and the Falun Gong truth, compassion and tolerance.”

“This spiritual connection is motivation for striving to excel, is the heart behind each movement of the dancer and each note of the musician. It is why audiences can feel there is something different about Shen Yun,” the website states.

Shen Yun dances can be dynamic and breathtaking, says the company website.

The Mongolian dance, one of a number of ethnic dances in the Shen Yun performance, is set to a backdrop of a tall blue sky and vast, open grasslands, these dances emphasize big movements of the arms and their coordination with the wrists and shoulders.

“I think they’re magical! I love them … I’m like a child with things like that actually. I’ve enjoyed the backdrops.”