'An Experience of a Life Time' in Milwaukee 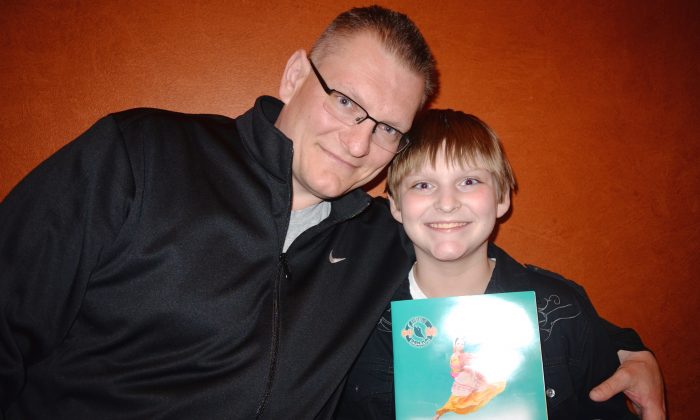 MILWAUKEE—A perfect father-and-son night out for the Grants was to witness five millennia of authentic traditional Chinese culture through Shen Yun Performing Arts at the Marcus Center for the Performing Arts on April 15.

Lucas Grant, who is 11, brought his father, Curtis Grant, to the performance. Lucas learned about Shen Yun from the 2015 Shen Yun trailer on YouTube.

“I’ve just been watching [the trailer] ever since. It is really cool,” he said. “I love China. I’ve just been studying it. It’s just an interest I have.”

Mr. Grant, an IT manger for Capital One, followed his comment, saying: “I loved the show. It’s great. The different colors, dances and styles. It’s amazing.”

“The one word to describe it is beautiful—the singing, colors, [and] like my dad said, the dancing. It was just amazing. It was pure Chinese culture,” said Lucas.

Beautiful and pure it is. Hundreds of costumes from traditional attire of emperors to common people grace the stage and state-of-the-art graphic technology support the mini-dramas which take the audience to a world where heaven and earth are one. Traditional Chinese instruments lead the melodies over a Western orchestra, states the company’s website.

Shen Yun’s mission is to recapture traditional Chinese culture. And classical Chinese dance, with its storytelling abilities, is the main vehicle to show “ancient myths, bygone heroes, or celestial paradises. Whether set in the past or in contemporary China, every dance embodies traditional Chinese values,” states the company’s website.

Lucas was impressed with many of the performances, yet it was the first dance, Following the Creator To Renew All Things, which captivated him.

“The opening act was mesmerizing. Each movement drew you in,” said his father. “It was amazing how the dancers were able to the communicate the story of creation through their movements.”

The trademark of Shen Yun is classical Chinese dance with its rich expressive power. It brings out “the inner meaning of intrinsic thoughts and feelings, reflecting the peculiarities of human nature,” and much much more, explains the company’s website.

Lucus sees the expressive power as “extraordinary … one second you’re laughing the next you’re crying. It was truly amazing.”

Mr. Grant said, “The dancers movements were very precise, but also fluid, demonstrating the hard work and dedication they must have put in to perform such a great show.”

After the performance the Grants sent an email to the reporter, elaborating on their impressions of Shen Yun.

Mr. Grant explained how he saw several of the dance stories. “Capturing Arrows with Boats of Straws was an intense display of bravery and ingenuity. … The Handkerchief Blossoms dance was graceful and elegant. The dancers endeared themselves to you with each movement,” he wrote.

The combination of live performers with the use of the animated digital images stood out for father and son. “The transitions from actor to screen were seamless and lifelike; being a techie that was almost my favorite moment,” Mr. Grant wrote.

Mr. Grant summarizes the evening’s performance with “What an amazing experience we were able to witness.”

“This was an experience of a lifetime. I recommend that you go and see Shen Yun yourself. You will not regret it!” added Lucas.

Shen Yun has performed in 18 cities in the Midwest alone on its 2015 world tour. Kansas City will be the last stop in the Midwest at the Music Hall on May 5-7, wrapping up 50 shows in total for the heartland of the United States.