Shen Yun, ‘It Makes Me Very Proud to Be Chinese’

The 'erhu took my breath away' 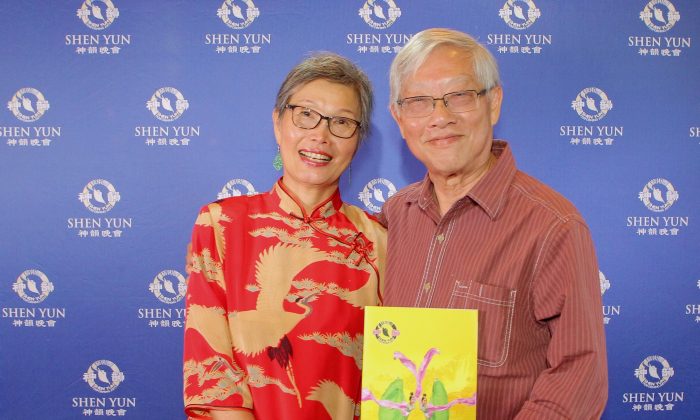 MELBOURNE, Australia—Former Singaporean couple Philip and Marie Loong are now retired and live in Melbourne. They experienced the joy of Shen Yun Performing Arts at Arts Centre Melbourne, State Theatre on Feb. 22, a special treat for the last day of the Chinese New Year.

Mr. Loong, a former financial director for Singapore TV, thought that Shen Yun was astounding. “The costuming and the way they have the stage and the backdrop interacting is outstanding and I am very impressed with that,” he said. “I feel enlightened in the sense that I learned a bit more about Chinese culture. Although I am Chinese, there is 5,000 years of history, so there is still a lot to learn.”

Mr. Loong plays the guitar and said he has an understanding of music. He thought the two-stringed erhu, with a history over 4,000 years, was “fantastic.” He added, “It just took my breath away.”

The Shen Yun website states, “A Western orchestra plays the foundation, while traditional Chinese instruments lead the melodies. The sound produced is uniquely pleasing to the ear.”

Mr. Loong said he was in the front row and loved watching the orchestra. With his appreciation for music, he counted the number of Chinese instruments and was amazed by their effect and how they carried the entire orchestra.

“I was amazed and I was impressed with the conductor because it is not easy to blend the Chinese music in a Western orchestral base, it’s not easy,” he said.

“The coordination, because the tone and the playing of the Chinese instruments are totally different from the Western instruments, so to blend them together is difficult.”

He said he would love to look at the instruments and the music sheets. “I think the amount of preparation and coordination to blend it together and to make such beautiful music is so difficult.”

“I am sure it took years to coordinate and to master it together, and for all of them to play together.”

He said he believed music could bring peace and harmony to our lives and the music of Shen Yun did that.

“I think this performance is something unique and it should be seen, and I would recommend it definitely,” he said.

She was particularly taken with the costumes as she used to teach sewing, so she appreciated the materials, adornments, and designs.

The website states, “Every costume in a Shen Yun performance is presented with brilliant colours, displaying a splendid spectacle—from the Tang Dynasty’s “Raiment of Rainbows and Feathers” to imperial dragon robes, phoenix coronets, and cloud capes.”

Mrs. Loong said: “I was looking at the costumes, including the head gear, very nice. The colours were striking.”

“It’s detailed, some embroidery work, I can imagine it has to be done such a way it allows movement. So it’s elegant and yet it portrays the theme of dance … the sequins and the flow of the silk.”

She loved how the costumes enhanced the dances.

“It flows with the body, so makes the torso very elegant, their movement with the costumes portrays the elegance of the dance and it’s lovely. It makes me very proud to be Chinese.”

Mrs. Loong wants her daughter and granddaughter to see Shen Yun as she fears the younger generations will lose the cultural heritage of China’s millennia of tradition which Shen Yun brings to life. She is hoping to bring them to the final performance in Melbourne and inspire her granddaughter to learn classical Chinese dance.

The website states: “For 5,000 years divine culture flourished in the land of China. Humanity’s treasure was nearly lost, but through breathtaking music and dance, Shen Yun is bringing back this glorious culture.”

She felt China was indeed the Land of the Divine in Shen Yun. “That is very much engraved, how it’s being used as a background and images … I know is it someone they respect, someone divine.”