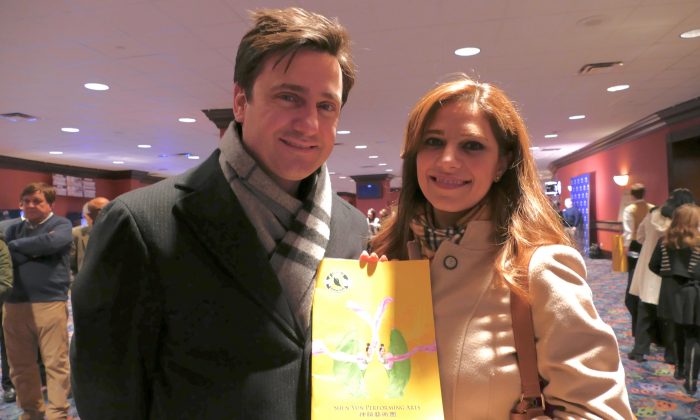 “It was very attractive … very informative … beautiful, and very sublime,” said Ms. Ponticiello after the Shen Yun Performing Arts New York Company’s evening performance at the Rosemont Theatre on Feb. 13. At some point, it was even hypnotic in its beauty, she said.

With its emphasis on form, bearing, and demanding tumbling and flipping techniques, Chinese classical dance is perfectly suited to conveying scenes from the imperial courts and the heavens, as well as China’s different folk and ethnic groups.

“I can only imagine how many hours and hours these dancers put in to master their skills,” she said. “Given how incredibly synchronized they are, I have no question that there is a lot of work put together in those scenes.”

“The erhu was extremely beautiful, and I’ve never heard anything like that,” she said. “At some point it sounded like a violin, and it can also sound like a flute, so it was beautiful to be exposed to that.”

According to the Shen Yun website, the erhu is “incredibly expressive, capable of imitating sounds from chirping birds to neighing horses, and in its middle to lower range, the ‘Chinese violin’ is “especially stirring and somber, a quality eminently suitable for conveying the grand pageant of China’s history and the emotions of its people.”

Ms. Ponticiello was moved by Shen Yun’s depiction of spirituality. For instance, in the dance story “Hope for the Future,” a white-robed Buddha with golden rings emanating from him is seen in the state-of-the-art digital projection. This image, Ms. Ponticiello feels, illustrates the virtue of compassion in a very beautiful but uncomplicated way.

Ms. Ponticiello also found it “really shocking” to learn in two dance stories that Chinese citizens face abuse and torture in today’s China for practicing Falun Gong, a spiritual self-cultivation discipline whose adherents perform five sets of meditative exercises and live by teachings of truthfulness, compassion, and tolerance. “I am a big believer of meditation so I think that would be really hard not to have it in your life,” she said.

In all, Ms. Ponticiello thinks Shen Yun “really allows you to see Chinese culture throughout history and also it is just very, very entertaining and beautiful.” She regrets not bringing her two young daughters to watch Shen Yun, and intends to tell them about the “beautiful dances and beautiful costumes” when she gets home.

“I think Shen Yun is a must-see,” she added.