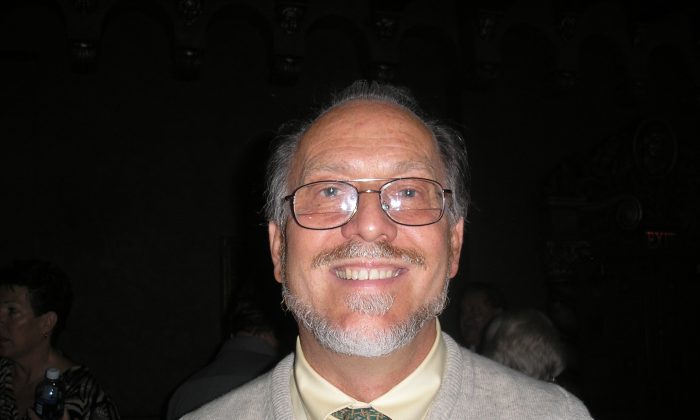 “The whole thing touched my heart, he said. “To tell you the truth, it brought me to tears several times. It’s truly divine.”

Since its founding in 2006, Shen Yun Performing Arts, a non-profit organization, has become a worldwide phenomenon, reviving the genuine, divinely inspired culture of China’s 5,000-year history through breathtaking music and dance, according to the company website.

At the heart of a Shen Yun performance is classical Chinese dance. “Known for its incredible flips and spins and its gentle elegance, it is one of the most rigorous and expressive art forms in the world,” states the website.

Accompanying the dances is a full, live orchestra, which includes both Chinese and Western instruments for a unique sound.

“It’s the most beautiful thing I’ve heard,” said Mr. Stevens of the orchestra, who thought that it probably was his favorite kind of music now.

China was once known as the “Divine Land,” with the belief that its rich culture was a gift from the heavens. Shen Yun seeks to revive this tradition, through demonstrating “principles such as benevolence and justice, propriety and wisdom, respect for the heavens, and divine retribution,” says the website.

“I think it’s obviously a divine message,” said Mr. Stevens. “I think it’s a wonderful, wonderful thing that the group is doing. I think it brings the idea of Heaven on earth.”

He said his heart was nearly bursting with profound emotions after watching the performance.

“It just truly, truly moves me,” he said.

Mr. Stevens highly recommended Shen Yun to others, and he hoped these principles could be experienced by more people.

“I think there is truly hope to bring Heaven to earth, and that’s exactly what we need right now,” he said.

Shen Yun Is ‘Grace and dignity’

Audience member Kay McKay was the executive director for the Big Brothers/Big Sisters of Northern Arizona for 25 years before retiring. She said she loved Shen Yun.

“It had grace and dignity, and it was just the best performance of loveliness and compassion, colors and music. It was beautiful!” she said.

Karen Zanzucchi, who is also retired now, but used to work in the Arizona governor’s office, attended Shen Yun with Ms. McKay. Ms. Zanzucchi was very grateful Ms. McKay had invited her.

“I thought it was fabulous,” said Ms. Zanzucchi. “It gives me goose bumps thinking about it.”

Ms. McKay particularly enjoyed a dance piece that embodied the virtue of compassion. A man was harassing and beating other people, terribly mistreating them, but when he broke his leg, they came and helped him, treating him with dignity and respect.

“Then he came out of his anger,” said Ms. McKay. “I thought it was very telling—very beautiful.”

Ms. Zanzucchi has always been fascinated with Asian culture, and she agreed with Ms. McKay that the compassion and dignity displayed were wonderful.

“It was just so beautiful, so gracious,” said Ms. Zanzucchi. “It was just uplifting to me.”

She recommended Shen Yun to others who have not yet seen it.

“They really should come see it because, it’s not like something we ever see in Arizona or that I’ve ever seen before,” said Ms. Zanzucchi.