Shen Yun Is the Prescription for Spiritual Well-Being 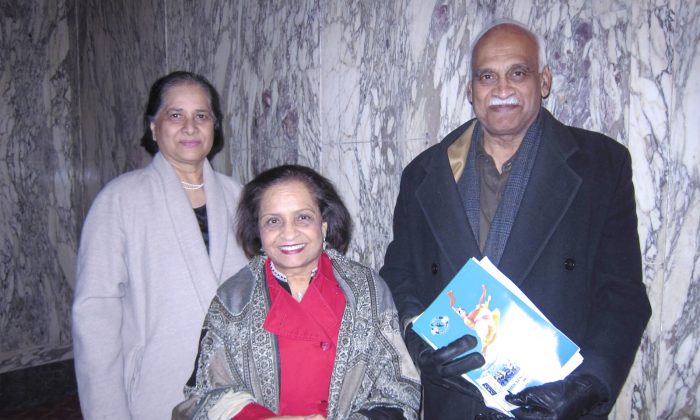 CHICAGO—”It’s all about the mind, peace, and connection with the spirit,”said Dr. Balakrishna Sundar, a urology specialist, after watching the evening performance of Shen Yun Performing Arts performance at the Cadillac Palace Theater on March 6.

The New York-based Shen Yun endeavors to complete its mission of restoring traditional Chinese culture through its performances. It showcases classical Chinese dance, a full-orchestra featuring sounds from the East and West, elegant handmade costumes, and digital backdrops.

“Principles such as benevolence and justice, propriety and wisdom, respect for the heavens, and divine retribution, all come to life, washing over the audience. Originating from Confucianism, Buddhism, and Taoism, these ideals are the essence of traditional Chinese culture,” the Shen Yun website states.

The overall meaning he took away from the experience was that of having a universal connection with God. “By placing science so much ahead of creation, we are taken away from God and this was an effort to reconnect … Science should not supersede spirituality, should not replace spirituality,” he said.

Dr. Prema Malani added, “People should be allowed to express themselves freely and there should be compassion among religions.” Feeling that although many people in today’s society may outwardly deny having any strong spiritual faith or devotion, she believes that inside, there is a part in all of us that believes in God.

Shen Yun reminded Dr. Rama Sundar that “Spirituality is very important … Compassion is a principle everybody should follow in life – love each other and be kind to each other, help other people.”

‘It makes you think about what’s important in life’

Also in attendance was Glenn Rynes of Lake Forest, Ill., who builds custom homes with his company, Rynes Development. He was accompanied by Ling Ling to the Windy City performance at the Cadillac Palace Theater on March 6.

Ms. Ling, originally from China, was eager to see the performance, as friends told her it was an interesting and enjoyable rendition of traditional Chinese culture. She said, “We enjoyed this show very much. Shen Yun has beautiful dancing, … very deep Chinese knowledge.”

After the performance, Mr. Rynes was left feeling very calm. “It makes you think about what’s important in life. I just feel very calm. It’s nice. It makes you forget about all the worries in the world and everything,” he said.

Mr. Rynes said he would tell his family and friends they have to see it to experience it. “It’s hard to put into words. You have to actually see the show,” he said.