Shen Yun Is the Essence of Ancient Chinese Arts 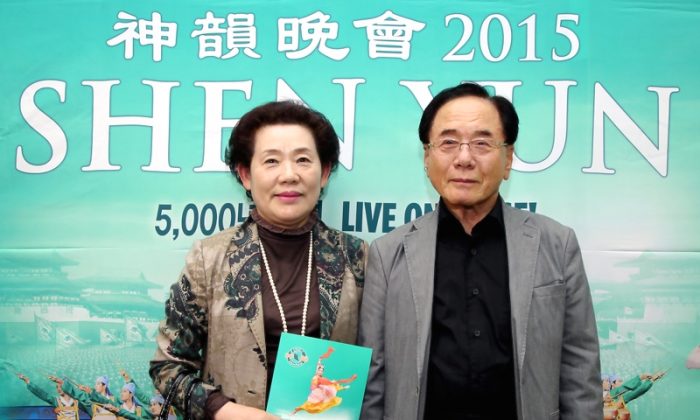 “After seeing Shen Yun I feel like I’ve had a wonderful journey to the culture of the classical Chinese world.” “[Shen Yun demonstrates] the splendid Chinese culture. The dances are full of vitality and vigor, with difficult technical skills. The coordination between performers and the dynamic backdrops is perfect, making the show lifelike and lively,” he added.

He highly praised Shen Yun’s dance, saying, “It’s spectacular, and the rhythm is very fast and powerful. Their magnificent skills deeply touched my heart. I feel I have got more insight into Chinese culture. I seemed to have seen the essence of glamorous Chinese ancient court arts.”

“I have long yearned for traditional Chinese culture. By attending this brief Shen Yun artistic feast, I truly experienced Chinese culture,” he said.

An additional creative aspect of the backdrop is how the digital animation and dancers on stage interact, where the animated characters descend from the screen and disappear precisely as the dancers on the stage reappear.

Mr. Kim noted that the backdrops enhanced the story-based dances. “With the very precise synchronization between the performers on the stage and the animated backdrops, the performance is very vivid and lifelike. The perfect demonstration of the era background on the dynamic backdrops is of help to our understanding of Chinese history.”

In conclusion, he said, “Shen Yun performs the essence of ancient Chinese arts.”

‘It can naturally purify our souls’

“Extraordinary, natural and spectacular,” said Choi Byeongho, chairman of the World Congress for Hallyu. “As it’s such a wonderful performance, I really hope that more people in the world will be able to see it.”

Attracted by Shen Yun’s reputation, Choi Byeongho came all the way from Seoul to Daegu to attend the Shen Yun show for the first time. He said, “Shen Yun’s performance has really touched the bottom of my heart.

Mr. Choi said, “[The dance] is very peaceful. I felt that dancers seemed to be flying above the stage, as if they were butterflies. As the dance was so gentle and brisk, I could really sense a kind of pure message and the noble situation of harmonization between heaven and humanity. It’s indeed an eye-opener for me.

“It dawned on me that humankind can perform dance and music so wonderfully,” he said.

Talking about the connotation of honoring heaven implied in the program, he said, “Perhaps everyone may enlighten to the idea that as long as we stick to the humanity of compassion and sincerity, we can eventually be blessed by heaven, and return to our original true selves.”

Impressed by the piece The Fable of the Brush, he noted, “The program illustrating the spirit of punishing the evil and praising the good is really very touching. It seemed to convey the message that people with compassion will be blessed by heaven.”

“This is indeed an extraordinary high level performance.”

“As dancers’ performance is so exquisite and natural, they must have gone through very rigorous training. In addition, they must have done self cultivation, so that they are able to perform such dance movements,” said Choi Byeongho.

“Nowadays, society is too attached to fortune, power, fame and personal interest. It would be great if Koreans can learn something about art from [Shen Yun]. Since it can naturally purify our souls, I hope that Shen Yun can perform in Korea more often, so that more Koreans can see its performance,” he said.

“I also hope that more people in the world as a whole can see such an exquisite show,” he said in conclusion.