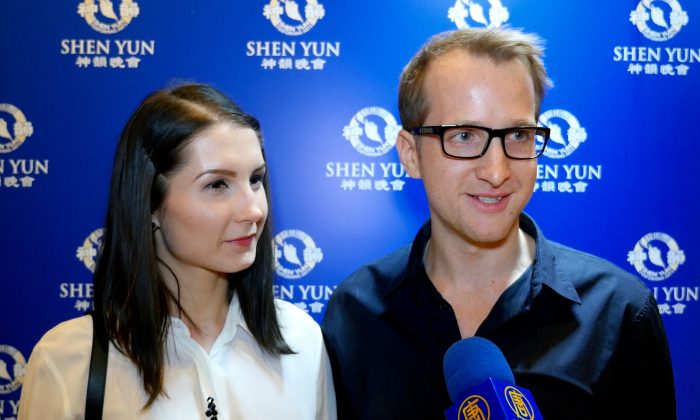 Julia and William Artamon were inspired by the colors of Shen Yun Performing Arts at Lincoln Center on March 3, 2016. (Courtesy of NTD Television)

NEW YORK—The brilliant gold of an emperor’s robes, turquoise gowns of court ladies, streams of coral water sleeves, and a spot of pink to highlight the auspicious blooming of the white Udumbara flower. Color set the tone for 5,000 years of ancient history, according to the Artamons, who saw Shen Yun Performing Arts at Lincoln Center on March 3.

William and Julia are both designers; he a founder of a workout customization company and she the designer and owner of a luxury interior design company.

Living in New York is seeing dark shades and monochrome colors day in a day out, according to Mr. Artamon, so the first thing he noticed in Shen Yun was the energizing use of color.

“What I like [about] the colors: it brings out the emotions of the dancers, and the theme of the dance, and the story they try to convey” to create a visually striking effect, he said. “Basically it highlights and emphasizes their movements more, and makes everything so jaw dropping. It’s great.”

In one dance, the rippling blue and white of the dancers’ fans and costumes create the effect of water. In another, the white and bright yellow skirts of celestial fairies are echoed in the palace of the moon from which they came. Color is often the first thing that catches an audience member’s attention.

“You don’t find these kinds of color combinations much in different shows. This kind of atmosphere, it’s very, very beautiful,” said Mrs. Artamon, whose interdisciplinary expertise extends from furniture design to urban planning. “Especially as a designer, I enjoy the design aspects of the show, and the costumes were just incredible.”

It is a multifaceted performance. In order to take the audience through 5,000 years of Chinese civilization, New York-based Shen Yun uses an animated backdrop, some 400 pieces of original costume pieces designed specifically for each year’s performance, classical Chinese dance, an orchestra blending East and West, and original Chinese songs sung by vocalists using the bel canto technique.

The goal, as the website states, is to revive authentic traditional Chinese culture believed to be imparted by the gods.

It was both elegant and strong, Mr. Artamon said, and “so very impressive” in how easy the dancers all made it look. Classical Chinese dance is full of difficult aerial and tumbling techniques, which the dancers execute while maintaining the elegance the dance form is known for.

The orchestra accompanying the dance equally held Mr. Artamon’s attention. He closed his eyes a few times to just focus on the sound and visualize the music. “It enriches the whole experience quite a bit.”

Mrs. Artamon felt inspired seeing thousands of years covered in just two hours, and how it was all put together.

“It feels very inspiring and amazing. When you leave the show and you’re kind of feeling good for [your] next creation,” Mrs. Artamon said.

The multifaceted performance was so much more than what Ms. Iwona Lupinska expected. Ms. Lupinska, an occupational therapist, attended Shen Yun in a party of four; with Kasia Lupinska, a speech therapist, Geovani Faddoul, a doctor, and Caroline Tarnawski, a business manager

The group spoke of the perfection with which the performance was assembled, like the exact synchronization of the dancers without the choreography succumbing to uniformity, and the way the fantastical mixes with reality in the dances.

Mr. Faddoul summed up the essence of the performance as an effort to show what the real China is. It is not the communist nation of today, he said, but a civilization of thousands of years.

“That’s what they are trying to show at least, a glimpse of what it could be if it wasn’t for what’s happening now with communism there,” Mr. Faddoul said.

It was when communism took power in China that the traditional culture was nearly lost—through targeted campaigns like the Cultural Revolution.

But the culture was alive in the arts on stage. Ms. Kasia Lupinska pointed to the erhu, a 4,000-year-old instrument with two strings.

“The sound of it is something you don’t hear in other cultures. It’s just specific to China. It’s just a wide range of emotions that go through [you] when she played it. There’re no words,” she said.

As the group saw it, Shen Yun was definitely making an impact.