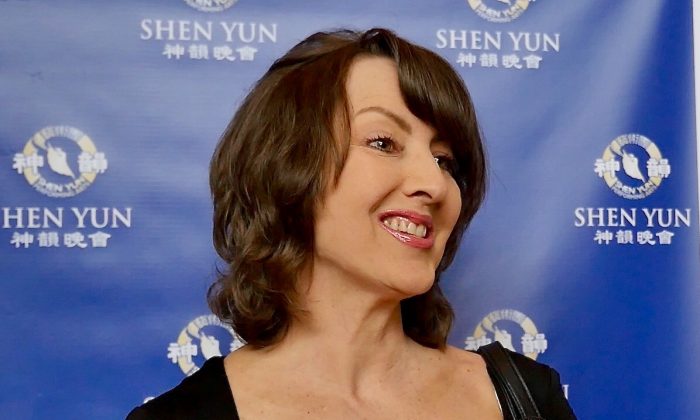 Anne Vollink said Shen Yun Performing Arts was "artistically integrated on every level" and "breathtaking in every way" after seeing the performance on Christmas Eve in Houston on Dec. 24, 2015. Her 90-year-old father had told her it was one of the most beautiful things he'd seen in his life, inspiring her to attend. (NTD Television)

HOUSTON—Over the past decade, classical pianist Anne Vollink had been on a personal artistic journey, pouring her soul into endeavors that resulted in a book of poems, composing and producing a CD of piano solos, producing one-woman shows in painting, poetry, and piano, and even a televised docudrama.

Being deeply involved in the art world and intensely committed to her craft, she has had concerns about the future of the arts. But after seeing Shen Yun Performing Arts at the Jones Hall for the Performing Arts on Christmas Eve, Ms. Vollink was filled with gratitude and hope.

“It was spectacular … [for] an American who doesn’t have the opportunity in this culture to see such grace, inspiration, beauty, precision, elevation, and the purity. It was very moving. As an American, I am so worried about our entertainment; it is so polluted, so unholy, so unbeautiful, so ungracious, so rough, so hard, so uncoordinated. Elevation and grace are becoming lost in the American culture,” Ms. Vollink said.

She continued to pour out gratitude to New York-based Shen Yun, which shows the traditional Chinese culture that can no longer be seen in China today.

Ms. Vollink’s recounting of the performance was incredibly detailed, as she is an artist and “everything that is aesthetic is important to me.”

“Shen Yun is beautiful,” she said. “It is artistically integrated on every level, from the colors reflecting the sets, to the geometry of the costume reflecting the architecture, to the expansive movement with the chiffon flowing and how that’s sort of accentuated by expansive string sections, the orchestral colors, everything. It’s just so integrated. The colors, the sounds, the fabrics, the movement—all of it is beautiful,” she said.

“Even the nuances of the handkerchief dance, just such nuances… When the music swells, the handkerchiefs flourish; when you hear a crescendo, you see the chiffon going into the air,” she continued. “When you see an aggressive dance, you hear a rapid fortissimo of the orchestra. You feel a sudden silence when there is a moment of suspense in the visual dance. So all that comes together, beautifully.”

Creativity and technical accuracy by themselves were not what made Shen Yun so wholly beautiful to her.

In the dance “Fairies of the Sea,” Ms. Vollink loved the female dancers’ blue and white ombre waterfall-like fans, and the way they used them. “The way they were oscillating vertically to create the fluttering of the waves—it was unbelievable,” Ms. Vollink said.

She loved it because in that moment, she felt joy. “I felt joy, I felt awe, and I felt happiness. I felt a little sad that the rest of the world doesn’t have such gentleness.”

The language of music also conveyed much to her.

“I can get a sense of antiquity but also a dynamic sense of possibility from it. There is a sense of something very old but also something emerging and beautiful,” Ms. Vollink said. She explained that modern music has evolved to focus on chaos or struggle and pain, whereas Shen Yun’s orchestra conveys peace.

This wasn’t to say that Shen Yun presented only scenes of peace—the performance included story-based dances of high drama. A newly ascended emperor fights to defend his birthright. A husband and wife are separated because of a force of evil. Spiritual beliefs are nearly quashed under a communist regime.

The difference is, Ms. Vollink explained, that any darkness portrayed in Shen Yun “was delineated.” They were specific things that the good was fighting against. “It wasn’t just an endemic, generic violence, [the] degradation of the entire culture.”

This entire concept was something Ms. Vollink could understand through the musical compositions. “You can hear it in the music, and it is against its fall,” she said.

Thus, Shen Yun was a source of great inspiration.

“It’s inspired me to work harder on my own craft, to not be complacent [and] to try to push myself harder, to push my students harder, to thrive for even more subtlety, to explain and express that subtlety counts, that attenuating a line matters; it’s all the little things that go into making art so beautiful and so elevated,” Ms. Vollink said.

“It’s those little finishing touches, it’s all of it. And the dancers are so skilled. I think they have such great mastery.”