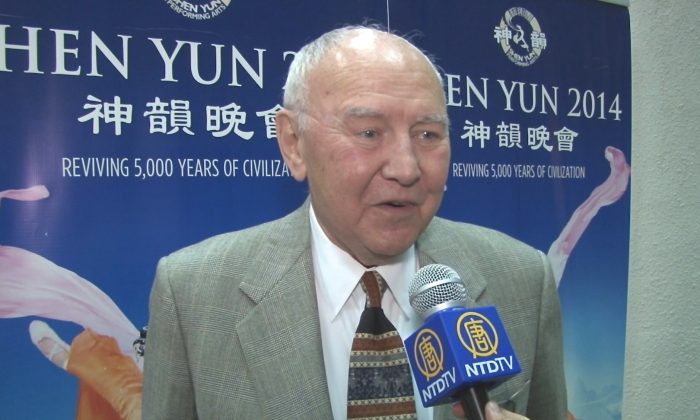 Arthur Nebiker at the Shen Yun Performing Arts performance at the Koger Center for the Arts on March 15, 2014. (Courtesy of NTD Television)
Company

COLUMBIA, S.C.—For Arthur Nebiker, a former executive with BellSouth International, Shen Yun Performing Arts’ portrayal of China’s rich history and culture was a highly enjoyable experience, and the performance allowed him to learn more about the Middle Kingdom.

“This performance today was really well received. I think everyone here enjoyed the performance,” said Mr. Nebiker, who saw Shen Yun’s performance at the Koger Center for the Arts on March 15.

“There were just several things that were so outstanding,” he said, citing the animated digital backdrops, which set the stage with beautiful scenes of China’s landscapes and celestial palaces and interact with the dancers on stage, as an example.

Referring to one of the dance scenes which takes the audience to modern day China and shows the persecution of the spiritual discipline Falun Dafa by the hand of the Chinese communist regime, Mr. Nebiker praised the skills of the dancers, and said it’s difficult to understand the Chinese regime’s suppression of culture.

“[The male dancer] was swinging those banners all about with such precision, that was quite extraordinary; but also, it’s so difficult to understand how communism tries to put a stop to all this,” Mr. Nebiker said.

“Culture is mankind; culture is who we are. You cannot stifle culture, and that’s what they’re [the Chinese regime is] trying to do. They want to build their own.”

Communism, Mr. Nebiker said, prevents freedom of expression, and tries to create its own culture.

“You can’t do that. You’ve got to rely on past culture and history that you’ve had over thousands of years.”

According to the Shen Yun website, “Over its past 60 years of rule, the communist regime has treated traditional Chinese values?centered on the idea of harmony between heaven and earth?as a threat to its existence. And in its systematic campaigns like the Cultural Revolution, it has uprooted traditional beliefs and destroyed ancient treasures?bringing traditional 5,000 years of civilization to the brink of extinction.”

It is with the mission of reviving China’s divinely inspired culture that Shen Yun was established in 2006 in New York by a group of leading classical Chinese artists.

“But being based in New York, the non-profit Shen Yun is able to freely present these traditions on stage,” says the Shen Yun website.

Mr. Nebiker said he was interested to learn through the performance that Chinese dance and many acrobatic movements have a history going to thousands of years ago, originating in China and evolving from dynasty to dynasty.

The performance, Mr. Nebiker said, is “quite remarkable.”

“That was just wonderful, and I enjoyed the performance very much.”