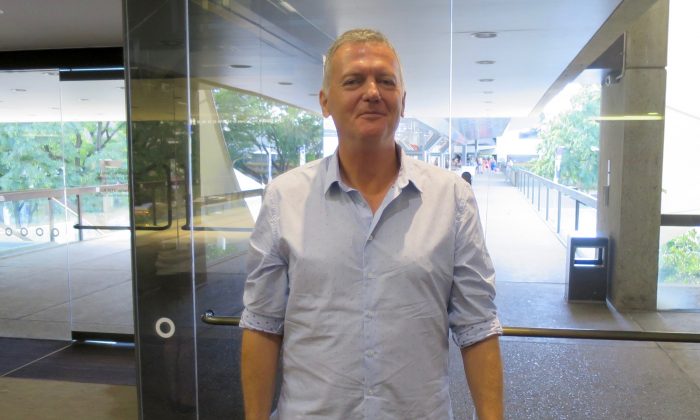 BRISBANE, Australia—Classical Chinese dance is at the heart of Shen Yun Performing Arts. The rigorous jumping, tumbling and flipping techniques along with the exquisite form, give classical Chinese dance its unique expression. This dance form is what first intrigued Paul Prout to attend Shen Yun at the Lyric Theatre on Feb. 27.

Mr. Prout, who is Group Marketing and Entertainment Manager for ALH Group, was fascinated by the dance pieces.

“That’s what attracted me here today, I really liked the idea of it … The show’s fantastic, it’s the first time I’ve seen a big classical dance routine like this,” he said. “I think it’s a great opportunity for being in Australia and seeing something that’s purely unique.”

Being a musician himself, Mr. Prout particularly enjoyed the piece titled “Drums of the Grasslands,” an ethnic dance in which a drumbeat sounds over the lush grasslands of Mongolia.

Seated close to the live orchestra, Mr. Prout was able to take in the unique blend of both Eastern and Western instruments, combined with the percussion.

“They’re very refined and I think the mixture of percussion and stringed instruments is very good,” he said. “I’ve enjoyed it, it’s great having the live orchestra sitting there, so enjoying the energy, particularly the two percussions, they’re working really well.”

During the Cultural Revolution, China’s traditional culture and beliefs were almost entirely wiped out by the Chinese Communist Party. For thousands of years, Buddhist, Taoist, and other disciplines were at the heart of Chinese society. New York-based Shen Yun’s mission is to revive this lost traditional culture.

Mr. Prout was surprised that a performance like Shen Yun cannot be seen in China. He emphasized how traditional music is declining and applauded Shen Yun for bringing it back.

“I’ve studied world music a little bit, so I do understand that in some cultures traditional classical music is losing its popularity in the countries where it comes from, so sometimes, the places to see it is outside the country,” he said. “But I’m glad for the opportunity to see it in Australia.”