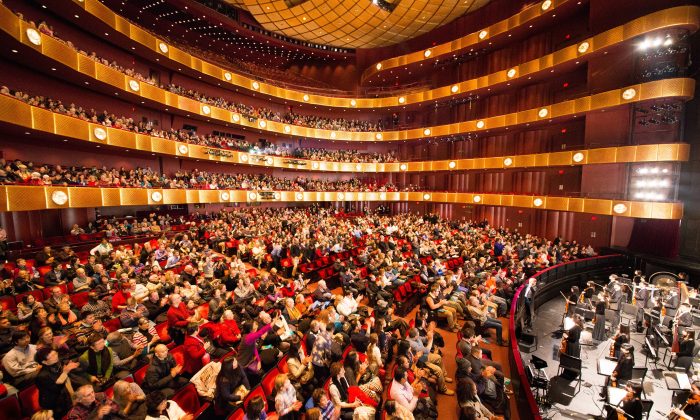 Ms. Sackoff owns the luxury Cornelia Spa at the Surrey Hotel on the Upper East Side. She said that despite her training in ballet, she can’t imagine the extent of the training the Shen Yun dancers undergo—they were that good. “And I learned a tremendous amount this evening,” she said.

Classical Chinese dance, the core of the New York-based company’s performance, is an ancient system that incorporates many complexities.

“Classical Chinese dance is composed of three main parts: bearing, form, and technical skill. Other than complete training in the fundamentals, it also entails systematic training in movements and postures, as well as very difficult jumping and tumbling techniques,” explains the company’s website. “And so, alongside ballet, classical Chinese dance is one of the most comprehensive dance systems in the world.”

Ms. Sackoff remarked on how incredible the system of classical Chinese dance is, as expressed through the variety of turns and jumps.

Apart from the dance, Ms. Sackoff had high praise for the orchestra that accompanies the dancers.

“The orchestra was incredible. At one point, I couldn’t believe that I was listening to live music, because it was such perfection–everything about it, from the dancing to the orchestra. I have never heard anything like this before,” said Ms. Sackoff.

The Shen Yun Performing Arts Orchestra is also unique, combining the sounds of East and West to create a harmonious and evocative sound. The company’s website explains that the effect is achieved by a Western orchestra playing the foundation, while traditional Chinese instruments lead the melodies.

Ms. Sackoff was also humbled by the great scope covered by Shen Yun, across different parts of China as well as different time periods. She imagined telling friends and family about the performance.

“I would tell them that it’s probably one of the most phenomenal stories and artistic ventures that I’ve ever seen,” she said. “And as an ex-ballet dancer, I’m amazed by the 5,000 years of history that comes with this. We’re just a drop in the bucket!”