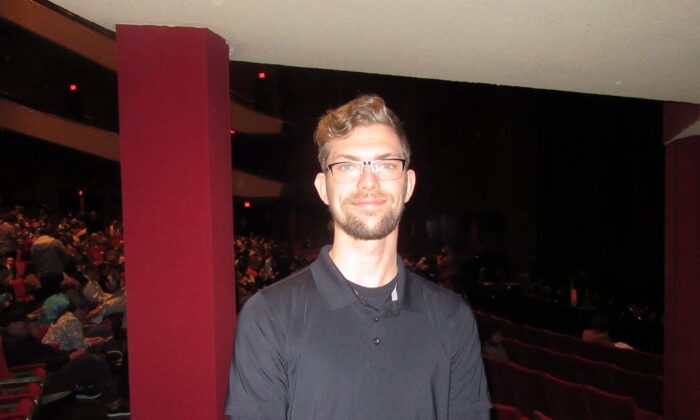 SAN DIEGO—Culture is like a diamond. It has many facets. Traditional Chinese culture is especially rich in variety and depth, having given rise to martial arts such as kung fu and the highly expressive, technically stunning art form known as classical Chinese dance.

Out of New York, Shen Yun Performing Arts is touring the world, showcasing traditional Chinese culture’s many facets. At the San Diego Civic Theater on Jan. 26, 2020, a local kung fu teacher Ryan Dacy took in Shen Yun and said “it’s one of the greatest things I’ve ever seen.”

“It’s amazing. It’s beautiful. Watching it and I can see the kung fu and martial arts aspects of it. The amount of trainings and stuff that go into it. It’s absolutely beautiful. The mixture of the slow and fast. Very kind of tai chi-esque. It’s just absolutely amazing. I love the stories behind it, too. It’s beautiful. It’s one of the greatest things I’ve seen,” Dacy said.

Dacy felt that the tumbling, flipping, jumping and kicking moves seen in Shen Yun had a connection to his own martial arts practice. It’s true that classical Chinese dance developed in parallel to martial arts, just as the word for dance and the word for martial arts in Chinese are homonyms.

Dacy said that the dancers’ dedication parallels the principles required in his classes. “And the motivation to learn these very specific skills. And timing is something that we want to work on when I teach my students, is working on that timing, waiting for that perfect time. To strike with that perfect time, to do that spin rounds that really make the eyes opened. Wow, that’s amazing,” he said.

A hallmark of authentic Chinese culture is its depth of emotion and long history of profound legends. Dacy felt strong feelings from some of the touching stories on stage that day.

“A lot of emotions for different parts,” he said. He described one piece in particular, “Abetting the Wicked,” and the profound sacrifice and redemption that was acted out.

Sorrow and hope, fear and compassion intersect in the piece Dacy referred to, which depicts real scenes from the persecution of innocent spiritual believers in China today.

Various aspects of the production lent to the emotional impact of the storytelling.

“The music is beautiful. I used to be in a band when I was in middle school. So, I like the music. It really makes you feel the emotion behind what they are doing. The show just tells you this story. You don’t need the words for the stories to be told,” Dacy added.

Dacy spoke more about the performance’s classical Chinese dance and its patented backdrops.

“I love it so much. They did an amazing job,” he said.

“The backdrop is impressive. … I have not seen an incorporation like that. For the one that, ‘boom,’ and he has in his hands. That’s [a] fantastic job how they incorporated it. The music and dancing—like perfect on sync for everything. That must have taken years of practicing. It’s really impressive.”

“I highly recommend it. I am going to tell some of the other instructors about it because I can see the martial arts aspects of it. And I absolutely recommend it,” Dacy added.

With reporting by Jana Li and Brett Featherstone.