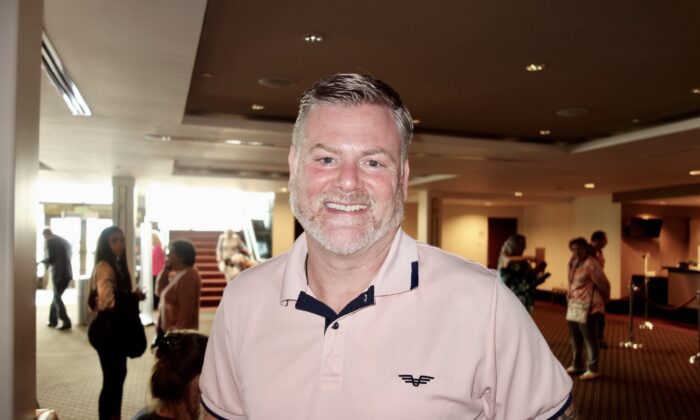 ST. PETERSBURG, Fla.—Everyone has their days when they need to take a breath and step back from the world. For Brad Walker, general manager of a manufacturing company, he chose Shen Yun Performing Arts as his getaway.

“I really liked the whole Phoenix thing. … Spiritually for me, being able to just stop and see the beauty, just stop my day,” said Mr. Walker.

“I took the day off. I never do that. I planned this for months and turned my phone off,” he said.

“I just wanted to experience this. So for me, it’s more than art. It’s my little spiritual moment, my little getaway.”

Shen Yun is based in New York and its mission is to revive China’s 5,000 years of civilization. Through dance and music, Shen Yun tells stories of the lessons that history has taught us. Despite its efforts to spread the beauty of Chinese culture, Shen Yun is not able to perform in China today.

“I think it takes you through the history … It’s an education, right? I wanted to learn; as people, we should always be evolving,” said Mr. Walker.

“I think that from the culture that I got to experience today, it shows that we’re pretty much the same. We’ve had different issues along the way as people in this country, but I think it’s important for us to [understand] as human beings what’s going on in China, and other places around the world,” he said.

“Take a moment and think about culture, what [it] can bring to human society and the human race. I think that if we don’t take time to recognize that, we’re really missing out, great things like this could be erased from memory.”

Mr. Walker applauded how every aspect of the performance seemed to be connected.

Every year, Shen Yun puts on an all-new production. Whether it be the dance, the music, the costumes, or the digital backdrops, every element of the performance is original each year.