Shen Yun Is ‘Magical and Something Really Needed’ 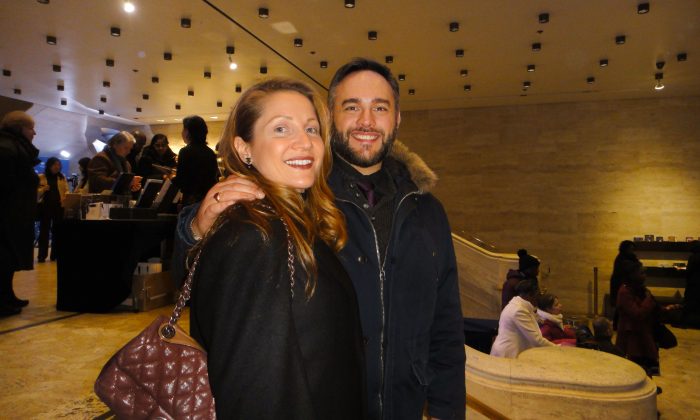 NEW YORK—Actress Jessica Russo found something powerful in Shen Yun Performing Arts: she witnessed the power of true art’s ability to remind us of our humanity.

“I thought it was magical and something really needed right now, people need to remember their own inner beauty, and to overcome things, and it was just extraordinary. It was beautiful and uplifting, and really joyful,” said Russo, who experienced Shen Yun at Lincoln Center on March 12 together with her husband, Jason Micciche.

“I thought it was spectacular, I love the message, it was a terrific, incredible visual treat, fantastic show—had an amazing time,” he said.

For the couple, New York-based was both profound and intimate, showing deep human truths while at the same time providing a sort of solace.

Shen Yun is the world’s premier classical Chinese dance company, touring the world each year to revive 5,000 years of Chinese civilization, which is said to be divinely inspired. Within the arts and traditions of this divinely inspired culture, people from all cultures and backgrounds seem to find universal values and truths.

The couple delighted in the “terrific, incredible visual treat” and the technical and artistic marvel of the production. But even more meaningful was the messages they felt they glimpsed in the art.

For Russo, one of the biggest takeaways from Shen Yun was the idea of faith.

“That I’m not the only one who believes in God intervening in our lives and angels coming down to help us,” she said. “Sometimes you feel like you’re alone in that thinking, but to see that there’s others who know it.”

Russo spoke of beautiful costumes and elegance in every step, stories that bridged heaven and earth, and mythical beings like fairies and the goddess of the moon.

Traditional Chinese culture was built on the idea of harmony between Heaven, Earth, and humankind. In the story-based dances and historical vignettes, the touch of the divine is ever-present.

In these stories, Russo said she saw themes like how something that seems bad or like a curse can be a blessing in disguise, and that even when you don’t know why something happens, if you find the good in yourself, and in a higher power, everything finds its way of working out for the best.

For many audience members, including Russo and Micciche, this revival of traditional values resonates deeply.

Micciche added, “Spirituality is such and important part of being human. And to not have that, I think we’re robbing ourselves. So it’s the utmost importance.”

“The spiritual message was great because it’s something that we’re losing, and it’s so important for us to hold onto,” Micciche said.

Micciche said the performance went by so quickly, and part of that might be because of “the good feelings that it portrays.”

“I think when you’re really enjoying something, you really feel great about it, it just feels like it goes like lightning; that’s exactly how this felt,” Micciche said.

Russo said there was so much beauty in Shen Yun that it put her into a beautiful place, too.

“Peaceful, clarity, joy, easiness, makes you more patient with people around you,” she said. “We’ll be back again.