Shen Yun is ‘Like a Connection to the Divine,’ Says Singer 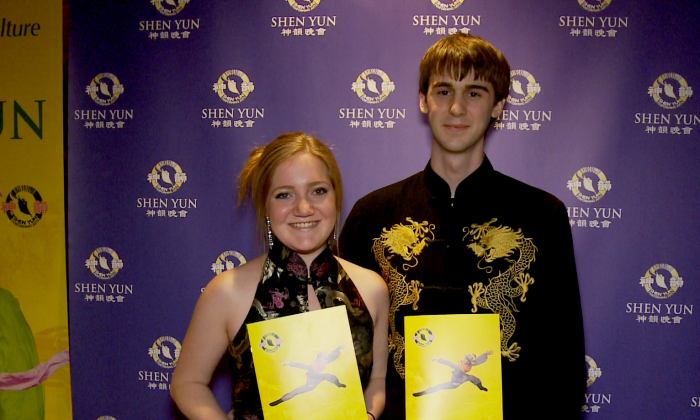 Amanda Cicero and Scott Masteronardi at Shen Yun Performing Arts in Hamilton on May 10, 2016. (NTD Television)

HAMILTON, Canada—When Jackie Marino comes across something exceedingly sublime, her word for it is “beyond,” and that’s how she described Shen Yun’s performance at Hamilton Place Theatre on May 10.

“I loved it. Beyond, beyond—that’s my word for when it’s not even part of our world. It’s “beyond.” Just beautiful.”

New York-based Shen Yun Performing Arts founded on a mission to revive the traditional culture of China through worldwide performances of classical Chinese dance and music. It is a 5,000-year-old ancient culture whose essence is a deep reverence for the divine. Ms. Marino felt this aspect deeply.

“A connection to the divine, like you were there. I’m so uplifted. Very inspiring,” she said, adding that her daughter took her to Shen Yun as a birthday gift.

She said she found the second half of the show particularly impressive.

“The whole second half—it just kept on escalating. Fortissimo to the end. It was beautiful, just beautiful.”

Shen Yun’s unique orchestra with its blend of Chinese and Western instruments also came in for praise.

“The orchestra just propelled everything. It was beautiful. It was just so amazing. Extraordinary, phenomenal—beyond!”

‘It’s something you feel from within’

“The instruments—you can’t hear that anywhere else. The orchestra is one of a kind,” said Mr. Masteronardi, an insurance agent.

“It’s actually emotional, to be honest. Hearing the blend it’s unique because you can hear the strings of the Western side plus the strings of the Eastern side, and when they combine it’s a really great sound. It’s something you feel from within. It’s emotional—that’s the only way I can put it.”

Another standout of the evening for Mr. Masteronardi was a solo piece performed on the erhu, a traditional Chinese instrument with only two strings, but the capability to convey a wide array of emotions.

“That’s my favourite,” he said. “I wish I could learn it. It’s a lovely instrument. I love it.”

“It’s very relaxing, soothing. I imagine it takes a crazy amount of talent to play that instrument,” said Ms. Cicero, a graphic designer.

These virtues resonated with Mr. Masteronardi.

“Very down to earth values. They’re very core values, everybody can learn from it. Something we should be thinking about practising every day. Tolerance, everything like that, the tradition, the divinity.”

“Like they explained, cherishing life and hoping to go back to heaven and things like that. It’s very clear in the show,” said Ms. Cicero.

“I loved the tradition of [the show],” said Mr. Masteronardi. “I didn’t want it to end.”