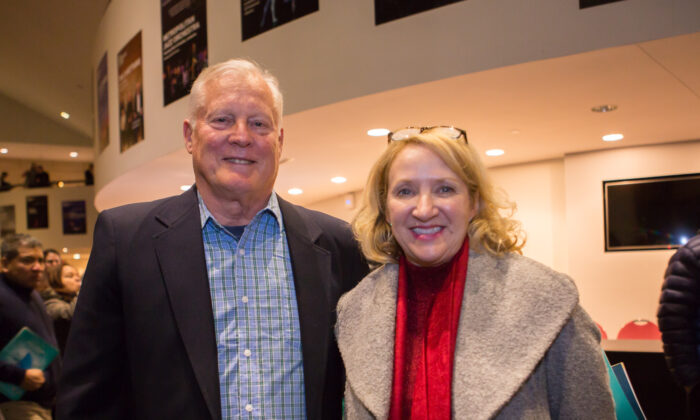 FAIRFAX, Virginia—For some, seeing Shen Yun Performing Arts is a dream come true, for others it’s a tantalizing surprise, and for still others, taking in the traditional Chinese music and dance company is simply life-changing.

Cindy Gingrich, a consultant for project management, saw what she called a surreal, spectacular, and magnificent performance at the George Mason Center for the Arts on Jan. 18, 2020.

The New York-based company brings 5,000 years of Chinese culture to the world. That culture is so steeped in an awareness of the connection between humanity and the divine that the ancient Chinese called their land the Celestial Kingdom. And each of Shen Yun’s nearly 20 separate dances or performances reveals that connection.

“It wasn’t like anything I anticipated,” said Stuart Cambridge, now retired from the Coast Guard, who accompanied Gingrich. “It was very, very telling.”

“I think they’re just fantastic that they were able to put those stories to dance. Wonderful!” he said.

Some of Shen Yun’s dances tell stories. The “mini-drama pieces draw upon stories and legends that span China’s history from the Yellow Emperor through the Tang and Song dynasties and all the way to the modern-day,” according to the Shen Yun’s website.

The stories embody traditional values—values such as courage, loyalty, and compassion.  In presenting these, Shen Yun “helps us understand. It helps everybody,” Cambridge said.

Gingrich loved the stories, too, and found the culture Shen Yun depicted to be respectable and introspective. “I think that comes out in the dance.”

The rich, value-laden culture isn’t something you expect to see coming from China, Gingrich added, because currently China is ruled by communists.

Since the Chinese Communist Party (CCP) is officially atheist, and Shen Yun, on the other hand, aims to revive the essence of Chinese culture, considered by the ancients to be divinely inspired, the CCP does not allow Shen Yun to perform in mainland China.

“I love that [Shen Yun is] bringing the beauty of the culture out even though that regime is in charge. It’s amazing that they can show us all the good things throughout their entire history,” she said.

Asked what she would take away from the evening, Gingrich pondered: “It’s.. it’s.. we can. I mean, I don’t have all the right words …”

Despite the difficult time she had explaining how the performance had been life-changing, Gingrich pinpointed that the performance’s spirituality was wonderful, and that “it’s one of the most beau—well it is the most beautiful show I’ve ever seen. Aesthetically beautiful. and spiritually.”

For George Seleme, a real estate investor, Shen Yun was full of surprises.

“The performance is absolutely amazing, beautiful, and colorful and a beautiful expression of the artists. [It] also helps us to understand what happened to the real culture of China.”

“This is the second time I have seen the show. The first time was last night,” he said.

He came back a second time because he was very surprised about what’s going on in China—specifically surprised that in China, “they don’t have the freedom to practice what their belief [is], which is very important to me,” he said.

Before seeing the performance, he had no idea of the dangers that those in China who believe in traditional faiths, Buddhism, for example, face.

He was surprised, too, by the format of the performance: “How they combine technology [with] the ancient culture to bring it to the present,” he said.

The visual treats were matched by the aural ones: Just as amazing for him was the mix Eastern and Western instruments in the live orchestra. “It’s amazing: the sounds, the human vibrations they produce,” he said.

For him, too, the most valued ancient Chinese tradition that hit his heart for most of the performance had to do with heaven.

Also in the audience was Kat Cardenas-Cruz, a professional musical theater performer, currently employed by Walt Disney World in Florida.

She had seen commercials for Shen Yun when she was young and always wanted to come.

“Honestly, it was a dream come true to see,” she said.

“I’m not Chinese, … but I still found it very inspiring, and very beautiful, and something I will cherish forever because it was something that I’ve always wanted to see, and it was everything and more that I could ever hope for in a performance.”

The name “Shen Yun” translates to something like “the beauty of divine beings dancing,” which the two emcees who introduce each performance explain.

For Ms. Cardenas-Cruz, “the meaning behind the name” aptly expresses the Chinese culture she saw onstage and is “very ethereal and very true to its name and what it meant.”

Since its inception in New York in 2006 by elite Chinese artists, Shen Yun has brought its expression of ancient China’s divine culture to the world and has grown into an international phenomenon, traveling to more than 150 theaters every year.

“I just recommend Shen Yun to anyone,” Ms. Cardenas-Cruz said. “I love it so much, and I think it’s just a beautiful work of art that should continue to tour around the world and just share the culture and the beauty of the culture—what it means to the Chinese people—all over the world. I think it should just always tour and never stop.”